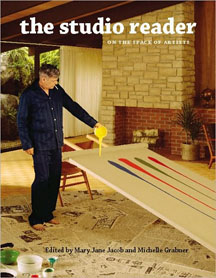 What does making art look like? Because artists’ studios are considered off limits, it’s pretty hard for the average person to know. Viewers typically encounter the object d’art in the pristine environment of a gallery as a completed thing—the concluding statement of an invisible process. The modern exhibition keeps artists in the shadows so that the artwork “can speak for itself.” While the artist’s studio is necessarily a private space in which artists can work and think, the cloak of mystery that shrouds the studio and blocks dialogue between artists and viewers creates a blind spot that leads to many misperceptions. Happily, such misperceptions are dispelled by The Studio Reader: On the Space of Artists, edited by public art curator Mary Jane Jacob and Michelle Grabner, who is not only a painter but also an active critic and co-director of The Suburban, an avant-garde gallery run out of the garage of her Oak Park home. Readers of this book in effect become seminar students in a class on “the space of artists” co-taught by Jacob and Grabner.

Unfortunately, the romantic image of the artist as a sensitive loner is alive and well—in fact, it is still so prevalent that it sentences many artist wannabes to years of frustrating isolation and causes viewers great confusion when they encounter conceptual art, performance art, or installation art which does not correspond to this narrow, outmoded ideal. Countering both the cloak of mystery surrounding the artist’s studio and the stereotype of the artist as heroic outsider, The Studio Reader offers multiple points of entry to its topic, with reprints of meaty historical scholarship and many short meditations on the studio written especially for the volume by artists working today. Here and there, a critic offers their impression on the art world ritual of the “studio visit,” as when Marjorie Welish relays her experiences maneuvering the minefield of ego and insecurity in order to engage artists in critical conversation about their work.

Directly undercutting the mad genius mythology, The Studio Reader opens with entries written by conceptual artists who describe their studios like offices. Buzz Spector lists “every studio I have had since graduating from college”; number one on the list reads: “Second bedroom in an apartment. Drawings made at small thrift shop table and stored beneath bed. One bookshelf, made of boards and concrete blocks, and a four-door file cabinet. Two years”. All fourteen of Spector’s studios since the 1970s are essentially larger variations on the first. John Baldessari recalls passing on an offer of a studio in the early 1970s when he started teaching at CalArts. “By that time, I was a full-fledged conceptual artist. You know, they don’t need studios. God forbid that it leak out that I had studio [laughs]”. Baldessari admits that he has three offices today that house his staff and equipment, and give him a separate space in which to think and make.

Photographs of studio interiors showing bookshelves, stacks of cardboard filing boxes, slide projectors, metal equipment carts, and so on, establish that the artist’s studio isn’t necessarily a place of explosive emotions as it is so often imagined to be, but that it is just as likely a rather dry utilitarian environment. Elsewhere less severe images of the studio appear. Performance artist Michael Smith describes himself as a “Chief Clerk” “puttering” around his studio, retrieving emails, writing lists, and endlessly rearranging stuff, all the time whispering to himself “I think I can, I think I can, I think I can”. Rachel Harrison writes, “at times the studio seems like a graveyard of unsuccessful work” and “I find a lot of what I do in the studio pretty embarrassing”. Because the selections written by artists are only a page or two long, I found myself Googling and bookmarking websites; The Studio Reader made me hungry for more information about artists I didn’t know.

The essays that situate the artist’s studio historically are also captivating, if less entertaining that those contributed by artists. In a book weighted toward conceptual art, it is good to see a selection drawn from Svetlana Alpers’s The Vexations of Art: Velazquez and Others (Yale University Press, 2005) chronicling the parallel development of the artist’s studio and the scientist’s laboratory from the 17th through 19th centuries. Tracking what she calls the “changing conditions of pictorial knowledge,” Alpers argues that the studio is an “experimental instrument” which shifts from a “mimetic” use in Vermeer’s time to an “analytic use” in Cézanne’s: “Having begun as a light-box making images of things, the studio becomes, like the mind, tracking basic connections in matter.” A section from Caroline A. Jones’s important bookMachine in the Studio (University of Chicago Press, 1996) charts the shifting definition of the American artist and his studio in the post-war period. Also in The Studio Reader are essays on the gendered space of the studio and artists’ efforts in the 1970s to repurpose derelict buildings for workspaces and quite a lot more.

In a particularly interesting essay devoted to the contemporary moment, Katy Siegel’s “Live/Work” draws connections between young artists’ fascination with “relational aesthetics”—artwork that focuses on participatory events and human interconnectivity—and the new kind of studio that young urban artists today typically rent—small rooms in re-fabricated industrial buildings filled with floor after floor of identical “studios.” Unlike the communal studio that characterized an earlier generation of repurposed industrial buildings, today’s young artists rent studios that have more in common with “the sweatshop and the office cubicle”. “I believe,” Siegle writes, “this more social art . . . expresses a survival instinct amid work conditions that foster isolation”.

The Studio Reader closes with an essay by critic Lane Relyea on the now ubiquitous assemblages constructed out of every kind of found object, raw building materials, cardboard, things that are shiny, and duct tape. Relyea aptly describes this breed of “unmonumental” sculpture as “conglomerations of heterogeneous, loosely related items”. These “mobile units,” he writes, “repurpose already existing objects, sites, and discourses, the aim being to access and link various databases and platforms—maybe immaterial social acquaintances or information, maybe more material pop-culture inventories like old record collection or the intimately biographied yet anonymous cast-offs accumulated in thrift stores”. Identity today, Reylea argues, is similarly mobile and networked though databases constantly accessible through our smart phones and computers. A far cry from the studio as a private and separate place where artists could plumb the depths of their individuality, ”the studio is now that place where we know we can always find the artist when we need to, where she or he is always plugged in and online, always accessible to and by an ever more integrated and ever more dispersed art world”.

Written on request for The Studio Reader, Relyea’s and Siegel’s essays, like so many others in the book, are truly engaged in a living dialogue instigated by the collection’s editors. The Studio Reader covers critical ground and should be required reading for any artist trying to find their footing in today’s art world.