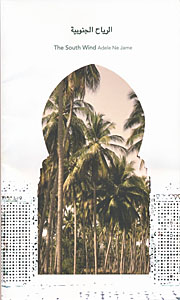 Poets weave textures with words that reach back in threads of association through our shared histories. The Lebanese American poet Adele Ne Jame, who has lived for four decades in Hawaii, creates a rich cloth of colors and scents, visions and reflections, in this handsomely produced collection of poems.

However attuned Ne Jame may be to the sounds and syllables of Lebanon refracted through 21st-century America, she translates from the language of her eyes, ears, and skin rather than the Lebanese culture of her grandmother who, a lifetime ago, chose to follow her grandfather from a small Lebanese village and settle with him, as his wife, in New Jersey. An areca leaf, bamboo cones, and fields of wild red anemones coexist in the world of these poems with date palms and fig trees, an uprooted hau tree, stalky purple ginger, and the oak trees of Mamre. The vivid imagery of dazzling blue light follows flying red clouds, wild dandelion and snow.

This blending of textures can be disorientating, at times, as if this poet were not quite present in the world. Ne Jame builds this sensuous texture even from the bricks and mortar of conflict and disappointment. She writes with a thoughtfulness born, one suspects, of a generous nature, and perhaps the ideology of the 1960’s Left Coast. In “A Chouf Lament,” a lament to an historic region of Lebanan ravaged by war, for example, she writes, “So that we might forget / for a moment how, like the fields of // the wild red anemone, we are waving / our songs in the air before night falls.”

The slogan “the personal is political” entered the lexicon of the 1960’s with Carol Hanisch’s famed feminist essay of that title, but its meaning has never been clearer than in Ne Jame’s poem “Cheating.” It is morning; the poet’s grandfather returns to his wife after a night at the gambling house. Only the poem’s title tells us the nature of his betrayal. It is a short poem of eleven lines, but says much about expectations we have for one another, the judgments we make, and contrasted to all of that, the simple truths of our human lives:

the two of them
beyond denial and the gorgeous morning light
flooding just the same through the glass.

Despite the husband’s sheepishness and the wife’s anger, the morning light floods “just the same through the glass” returning us to life. In other family poems here, there is at times very little light, only “sleep and forgetfulness,” as when the poet’s father is “already asleep in the small room / off the kitchen, having given himself up / to the next small loss.” But life goes on even when dreams are lost, or husbands and wives argue—or warring factions in Lebanon kill each other, and houses and relatives in Lebanon must be abandoned.

In “To Haas on Returning from Baalbek,” Ne Jame writes a message of “redemption / out of the unspeakable” from Beirut, where the poet stops in mid-traffic to gaze on the famous statue in Martyrs’ Square of four bronze figures honoring the sixteen people—some Muslins, some Christians—hanged on trumped-up treason charges in 1916 during the Ottoman rule of Lebanon. Ne Jame ponders,

How we manage beauty, if not redemption
out of the unspeakable—
how we love the dead we didn’t know
who somehow shuffle by in our dreams.
Be foolish—let your heart grow larger,
the mystic says. Salt to the wound
that burns and saves.

Quotations from, and references to, many writers and a few philosophers and artists appear in these pages—Federico Garcia Lorca, William Blake, Dante, Chagall, George Eliot, Delmore Schwartz, William Bronk. Rumi, Darwish. But perhaps the most palpable presence is that of the Lebanese American poet Haas Mroue, who died suddenly at the age of forty-one in 2007. Ne Jame borrows his words for an epigraph: “We are all refugees, / we drift through places / like pollen in May.” They are apt lines to preface a collection of poems that does sometimes seem to drift, for a poet at sea in the world. Ne Jame also addresses her title poem to Mroue, a poem in which the poet dreams of a mountain lion stalking her at night, “huge, whirling / figure eights brushing heavily against me.”

This book of fifteen poems, Ne Jame’s fourth book, has an afterword by Hayan Charara, who edited Inclined to Speak: Contemporary Arab American Poetry (University of Arkansas Press, 2008). In his afterword, Charara cites Naomi Shihab Nye’s description of Ne Jame’s poetry as possessing a solitude that “weaves it spell around you.” This description is apt; Ne Jame sets aside expectations and ideas of an Arab American identity throughout these poems, and creates a sensual, immediate, and generous reality, one that asks you to “let you heart grow larger.”