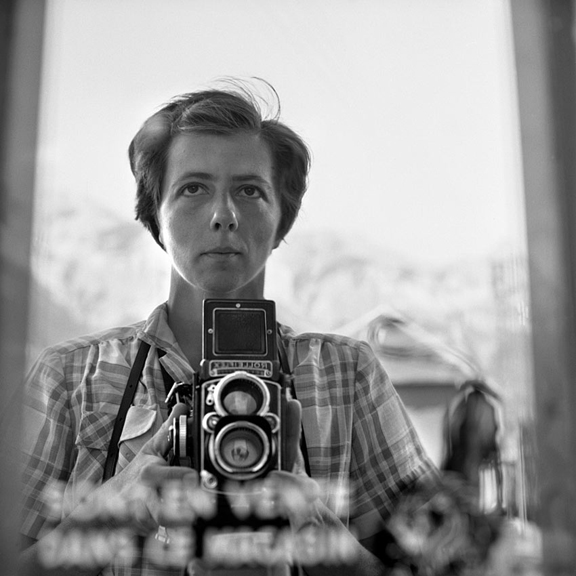 You may have heard of Vivian Maier, and then again, you may not have. A brilliant photographer completely unknown in her lifetime, she made her living as a nanny for well-to-do families in New York and Chicago. From the 1950s to the 1990s, Maier shot approximately one roll of film per day. Her stealthy passion ruled her life, yet she kept her visions hidden, much even in undeveloped film.

Maier’s oeuvre has only taken its place in the field of photography through its chance discovery in 2007, and entirely without her knowledge or choice. Old and isolated, she was in a Chicago hospital when a handful of collectors purchased the contents of her abandoned storage lots and discovered over 100,000 images, along with some audiotapes and home movies. Among the purchasers was John Maloof, a Chicago historian; he tried to locate this reclusive, talented artist he had stumbled upon, but was unable to before she died in 2009. Since then, Maier’s work has been highly acclaimed and shown in museums and galleries around the world, and is the subject of the recent documentary film Finding Vivian Maier. 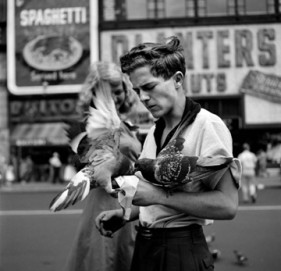 In Vivian Maier, Street Photographer (powerHouse Books, 2011, $39.95), Maloof presents about 100 of Maier’s photographs. All are black and white, and all taken with her trusty Rolleiflex, a choice that set her apart from most photographers who were using the then-more modern 35mm.

While focused on street photography, the book still shows the breadth of Maier’s interests. She creates striking geometric patterns from sunlight and shade and the occasional painterly image of buildings and public spaces. There are mid-range shots showing groups of people in action; these catch a moment and imply the before and after, the mind inevitably reeling out a story. We see social commentary as well as death and disaster—a half decomposed cat on the curb, a smoldering armchair on a sidewalk—but from this selection, she seems most interested in individual people. There are shots of the well dressed and well heeled, of the derelict and deformed, of men at work and children at play. She took pictures of black and white, rich and poor.

Maier excelled at making portraits. A striking example in this collection shows a young, thin man with two pigeons—one settled on his forearm, the other, its wings still flapping, just landing on his fist in which he clutches bird food. Dapperly dressed in pleated pants and white shirt, he looks down intently, his mouth drawn, his brow knit. Best of all, his hair is swept up from his forehead into an elaborate pompadour. The hair and the flashing feathers are of a piece, conflating man and bird: the young man is a bantam cock who struts the streets, challenging anyone to take him on. But there’s an incongruity, too, between his dress and his intent focus on the birds, his desire to connect with the nonhuman, to escape the weary charade that is the human pecking order. 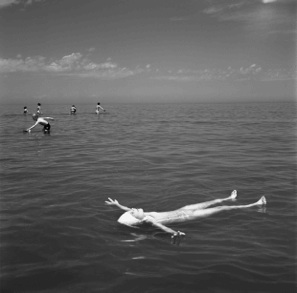 With nearly 300 photographs reproduced, the selection in Vivian Maier: Out of the Shadows (CityFiles Press, 2012, $60) is much larger, but the onslaught of images is tempered by being arranged into categories (“Snapshots,” “America,” “Beach,” etc.) The added range of images highlights Maier’s openness to the moment, her ability to capture a complete scene: in the Beach section, for example, a posse of teenage girls in bikinis emerges from the waves of Lake Michigan under a vast sky above. Edited by Richard Cahan and Michael Williams, this volume shows that Maier’s vision and technique rose to wherever her camera took her.

Maier’s oeuvre is large, and these two books present just a first serving. Both contain only black and white photographs, but she shot color film in her later years, and movies, too. Some of this color work is on display in Vivian Maier: Self-Portraits (powerhouse, 2013, $50), a subsequent volume edited by Maloof; Maier’s work in the subgenre of self-portraiture is particularly haunting, given the artist’s invisibility during her lifetime. Photography fans are advised to keep their antennae up for new revelations as more of Maier’s treasure trove of images is made public.

Click here to purchase Vivian Maier: Out of the Shadows at your local independent bookstore