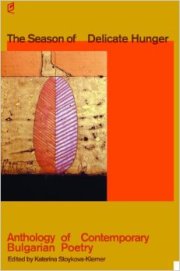 For most Americans, Bulgaria remains a shadowy presence, a nebulous country somewhere in Eastern Europe that was part of the former Soviet Bloc. It has not attracted the same political attention as many of its neighbors, and much of its literature and culture have similarly slipped beneath the American radar. Other than a spattering of anthologies and a few collections by individual poets, Bulgarian poetry in particular remains largely unavailable in English. The Season of Delicate Hunger, a new anthology of Bulgarian poetry edited and largely translated by Katerina Stoykova-Klemer, helps to remedy this dearth, providing American readers with a refreshing glimpse of contemporary Bulgarian poets.

Stoykova-Klemer, an accomplished American poet and native Bulgarian, is the perfect vehicle for rendering the fragile body of the poem for an American audience. Not only is she acutely sensitive to the workings of Bulgarian language and culture, but she has an exceptional ear for contemporary American poetry, and her translations are so seemingly effortless that we forget we are reading translations and connect directly with the work itself.

The anthology is ambitious in scope and scale, taking on the voices of thirty-two living poets from a variety of regions, generations, and aesthetics; many of these writers are being made available in English for the first time. This wide range gives us the sense of a poetry that is as varied as the intellectual landscape of Bulgaria itself: the conversational digressions of Vladislav Hristov, the reimagined mythology of Kristin Dimitrova, the philosophical “Visions” of Kerana Angelova, the symbolist leanings of Ani Ilkov, the lyricism of Petar Tchouhov—all are present here in a single collection.

The anthology not only introduces a diverse group of contemporary Bulgarian poets to an American audience, but it also does what the editor sets out to do in the introduction: it conveys something of the Bulgarian mentality and literary sensibility. Some of the poems remind us how deeply the experiences of communism and the disappointments following its collapse are embedded in the Bulgarian consciousness. In Mirela Ivanova’s “What I Remembered, but Couldn’t Tell My Six-Year-Old Daughter, While We Were Stuck for 11 Minutes in the Elevator . . .,” the speaker thinks to herself, “I’d been stuck in the regime itself, and it felt / as if it wouldn’t end, and then I caught / the incurable inadaptability / to the bright future.” Other poems like Ekaterina Yosifova’s “You Don’t Need to Know Geography” tap into the cynicism and self-deprecating humor so prevalent in the Bulgarian psyche. When events seem out of whack in the world, a “girl ask[s]: is this map Bulgarian? / They smirked. / Everything made sense to them again.”

The anthology also includes poems that offer us a Bulgarian perspective on American society that is sometimes humorous, sometimes disconcerting, but always provocative. Vladimir Levchev’s “Justice for All,” notes ironically how “The rich man can buy a senator. / The poor man can / buy the rich man’s newspaper / and read / about the senator.” Ivan Hristov’s selection gives Americans a more humorous view of themselves, discussing an American dog “Snickers”:

Actually,
all dogs in America
are named Snickers
so it’ll be hard for you
to picture him

and a “Panera Bread” where the restaurant pager becomes “a tiny / spaceship”:

So why
am I writing
these things now?
No matter!
I just wanted
To dedicate
this poem
to everyone
who has ever thought
that such a thing
does not exist.

But while the anthology does communicate much of the Bulgarian sensibility, it reaches far beyond national boundaries and speaks directly to what it means to be human. The book contains powerful poems of loss and death, from Marin Bodakov’s intimate “Mud on My Palm,” where the speaker tells us how “with my little household shovel, / I finished burying my dad. / I wish this were a metaphor”; to Georgi Gospodinov’s pensive “Time Is a Neutron Bomb”:

Nothing will be knocked down,
the houses will stay,
the streets will stay,
the cherry tree in the yard will stay.
Only we won’t be here.
That was the lesson
about the neutron bomb.

I’ve known since then,
death is a cherry,
ripening without me.

These are poems that do not back away from the dangers and complexities of living, which a small nation at the crossroads of history— including, most recently, 500 years of Turkish rule, a communist dictatorship, and a failing democracy—cannot help but understand. Even passion and desire are marked with uncertainty, as in Aksinia Mihaylova’s untitled love poem:

thread the needle with a stronger strand
to sew up all fissures
in you and me, in the space,
the seclusion squats at the needle’s steel pinnacle,
one sleeve in your lap, the other
in my lap, hurry,
hurry, one matchstick is not enough
for the dark that will swallow us.

The pieces in the anthology startle us with their raw emotion; they show us our most vulnerable and most honest selves. In Valentin Dishev’s words,

Sometimes,
if a scream cuts through
your veins,
there is no need to look around.
Sometimes you are the blade.

Such moments make us reexamine our lives and reconsider what we thought we knew, as the best poetry always does. The poetry on these pages may be uniquely Bulgarian, but it resonates with a beauty and humanity no reader is likely to forget.