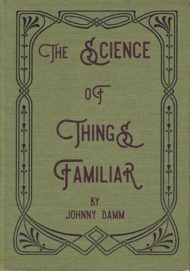 In the interview that concludes this hybrid work, poet Johnny Damm confesses, "I'm a cis, white, straight man: I have privilege on top of privilege, and my voice certainly doesn't require amplification." While such a confession, with its histrionic air of noblesse oblige, almost always sounds more like self-aggrandizement than self-criticism, it does help to orient the reader ethically and politically in Damm's aesthetic world. The Science of Things Familiar is a collage whose startling juxtapositions try to shock readers into awareness of the various subtexts—emotional, sexual, racial, environmental—of twentieth-century American popular culture.

Damm explains in an afterword, "Poetics and Process," that the "things familiar" of his book's title-itself borrowed from a nineteenth-century textbook-are "music, film, and (comic) books." The "science," he leaves the reader to understand, is the critique of ideology: an explanation of the material circumstances that brought these "familiar things" into being, with an emphasis on the exploitation and oppression underlying them.

Damm works in the disparate modes of appropriation, pastiche, and confession, sometimes all at once. Bookended by faux-scientific textbook diagrams with poignant titles—"Diagram of Your Breath," "Diagram of Your Touch," "Diagram of What Remains Unsaid," etc.—The Science of Things Familiar also includes comic-book cut-ups, mock entries in a biographical dictionary of film, a critical essay with confessional footnotes, and more.

In The Science's first third, Damm arranges collages of panels from old Classics Illustrated comics and replaces their expository and grandiloquent narrative elaborations on canonical literature with his own bittersweet lyrical prose:

Walt Whitman feels a sharp need to look out the window but pauses over the drawn back curtains and rolls the sinewy fabric between his fingers. There's a word for this, he thinks. There's a word.

The irony in this section, with its clash of the stagy old comics' pomposity against a contemporary so-sad-today sense of self-conscious sorrow, has a light touch.

The book's next two divisions are more polemical. In the middle third, Damm explores, via a Borgesian parody of a film dictionary, the exclusion of women from cinema. The third section returns to comic-book collage, this time to explain the class- and race-based marketing decisions that segregated American popular music into white middle-class norms (pop, rock) defined against poor-white and black music construed more as folklore than art.

Damm certainly addresses serious topics, and his treatment of them is often arresting—for instance, in the last section, machine-gun onomatopoeia ("rat-tat-tat-tat-tat-tat") borrowed from war comics exemplifies the racial and economic violence underwriting the music industry. As important as this subject matter is, though, Damm's information is not new, and his implied outrage, while well-intentioned, has become a somewhat rote gesture among right-thinking writers. More impressive because more unpredictable, and thus riskier, is the impassioned re-writing of Classics Illustrated comics that opens The Science of Things Familiar. In these pages, Damm fulfills his title's implied promise to return the familiar—whether canonical literary works or old comics—to the strangeness from whence they came.