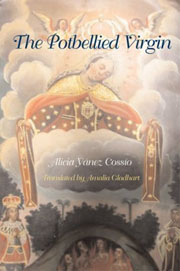 Alicia Yànez Cossìo's 1985 novel, recently translated into English, is recounted breathlessly, as though time or circumstance might soon prevent it from being told. Some sentences are short or list-like, moving the reader quickly through details, as in the description of a town fair: "There are platters of guinea pig bathed in peanut sauce that look like drowned mice. There are potatoes in their jackets . . . There are baskets of steaming hominy." Other sentences stretch into paragraphs, winding their way through setting, character, and commentary, as with the novel's opening line:

Clip-clop, clip-clop, clip-clop, striking showers of sparks against the rocks carved by the water of the rivers whose terrifying currents carry whole settlements to the Oriente, over the round stones like hard rolls, like the bread eaten by the sweat of one's brow, the bread that is burnt at the oven door, stones that have been placed one by one by the calloused hands of the Indians, gallops Magdalena Benavides, and she thinks that the day will come when people from far away, who are the ones who discover foreign lands, will be amazed and come to see with their own eyes the hand-laid cobblestones of the town's streets and its long roads.

This narrative style fits well with the novel, which is all about talk and the urgency to convey one's own version of events.

There are two families in the book's Andean town: the Benavideses and the Pandos. The Benavideses are conservative, religious, and the caretakers of the town's prized icon, the Potbellied Virgin. They are also blonds, being of both indigenous and European descent, and they see this as physical proof of their superiority and right to govern the town. The Pandos are dark-haired mestizos, who used to own the land, but who were dispossessed years before when the Benavideses manipulated legal documents to take control. The plot turns on the Pando family trying to regain power from the Benavides family. Yànez Cossìo also weaves in a couple "misfit" characters, such as a Benavides woman who wants to escape small-town life and a Pando who avoids everyone to publish his subversive newspaper.

Much of the novel pokes fun at the Benavides family. Sometimes the jokes speak to serious issues; for example, in such an isolated and impoverished town, the Benavides' Sisterhood of the Bead on the Gown of the Potbellied Virgin keeps its icon "radiant in her white gown embroidered with gold threads and baroque pearls; with her crown of one hundred and thirty-six diamonds and eighteen emeralds as big as cymbals and her scepter of solid gold that she can't hold up which they have had to tie to a post." Sometimes the humor is lighter. The town has cycled through numerous priests in quick succession because no one can stand working under the neurotic rule of Doña Carmen Benavides, the head of the Sisterhood. She develops an anxious tic in her left eye trying to get one to officiate the Jubilee of the Potbellied Virgin, which makes people nervous that she's flirting with them. Eventually, in a move that is more comedic than threatening, she kidnaps two missionaries who are passing through town and forces them to lead the celebration.

The end, for both the novel and the Sisterhood, brings into full view a third player, the military, another oppressive and absurd force. Whereas the Pandos and the Benavides both speak partially in local proverbs, indicated in italics throughout the novel and demonstrating each group's place in the community, the military men do not. With their entry into the book, they begin to bear some of the ridicule the Benavides once faced mostly alone.

Much about Ecuador's history, attitudes toward race, and play between religion and the military has been addressed in this slim novel—and in the translator's excellent nine-page introduction. But in the end, as in life, everything hinges only on which of history's storytellers was heard.