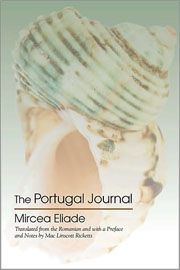 “The blank spaces in a private diary are also revealing,” observed Mircea Eliade, the famed Romanian historian of religion who served as a diplomat in Portugal during World War II. Yet his journal from this era was also a secret project, hidden away in folders and kept, at times, in a safe. A sample passage from 29 August, 1945, reads, in full: “In the struggle he has been carrying on with ex-king Carol, Brutus has emerged triumphant. I note, for the time being, only this date. When I’m able to write everything without fear, I shall complete this note with some very interesting details.” No such details were ever added.

The translator of this volume, Eliade scholar Mac Linscott Ricketts—who had access only to photocopies of the original notebooks provided by Eliade’s widow, of which two pages were missing—says in his preface that “the reader does not have the impression that the material has been ‘censored,’” but there is a great deal of obvious self-censorship on the part of Eliade here. That August entry from 1945, for instance, has no accompanying footnote or explanation. The preface, referring to Eliade’s association with the fascist Iron Guard via vague allusion—“his ‘Legionary past’”—claims that Eliade himself thought publication of this journal would answer questions, from Gershom Scholem and others, about the extent of his commitment to that anti-Semitic movement. That no such clarification can be found here reads as editorial avoidance of the issue.

One massacre of Jews is mentioned in the footnotes, in reference to an entry in which Eliade mentions “making inquiries among my Legionary friends: what happened, and why,” in Bucharest on January 21-23, 1941; he is, however, “convinced that a trap was laid for them into which they fell like naïve fools.” Nazi persecution is mentioned only as a rhetorical smokescreen invoked to further the Allied cause. Ample evidence is given as to why Eliade opposes the Allies. He fears a world “disfigured by Communism,” and rages against “Anglo-Saxon imbecility,” “the ferocious imbecilities of a Churchill or a Roosevelt,” for aiding the Soviets. Put bluntly, he believes that “If the Reds win, then I and my oeuvre and my nation—will disappear, actually or figuratively speaking.”

On the one hand, there is naïveté in his engagement with history; this, after all, is a 34-year-old, obsessed with his oeuvre, fantasizing about an annotated catalogue of his own works, musing “My capacity for understanding and feeling culture, in all its forms, is unlimited.” Yet this naïveté is not unrelated to the charges that continue to haunt that oeuvre—one of the most important in the study of religion—to this day. “My disgust for history has grown so much that almost nothing that’s happening in the world interests me any longer,” he writes in 1944. The statement seems slightly disingenuous, for to Eliade, his true interest, prehistory, never went anywhere. The archaic, the “pagan,” the “cosmic rhythms, symbols, signs, magic, sexuality” that obsess him are evident in current events—in Hitler, for instance, whose work reengages mythic structures, and in the Portuguese dictator Salazar, a biography of whom Eliade wrote. The preface of that volume is reproduced here, allowing us to see Eliade’s interest in “a Christian form of totalitarianism,” by which he means something to be applauded, a “spiritual revolution” of the sort he, too, is working to bring about.

Contemporary philosophy fails because it focuses on the “fallen man” of the present. Rather, Eliade insists, we must look to so-called “primitives.” As he explains it:

Imagine that on a beach somewhere there are five civilized men, all of whom have long since become sexually impotent. In addition, one is deaf, one blind, one crippled, another has a stomach ailment, another a nervous condition. All, however, are well-dressed, very clear, cultured, etc. They are watching a group of ‘savages,’ almost naked of course, who are playing, dancing, singing, and, especially, making love—right there, under the eyes of the observers.

The crippled moderns will each, in their own way, lack full perception of the event, but “All will know [the “savages”] are making love and that, in this respect, at least, they are infinitely superior.”

The Portugal Journal makes clear the confessional quality of Eliade’s engagement in the history of religions. “I am not a man with normal religious experiences,” he writes. “[R]eligion for me is the thirst for and intuition of the real, the Absolute.” Yet he means here “religion” not merely as the subject of study but also as a personal spiritual path. His scholarship emerges from and echoes his own self-proclaimed Christian “paganism,” and this paganism, celebrating prehistory and the potential for a new humanity, parallels the fascism of the Iron Guard, its celebration of blood and soil.

One can only hope the translation and publication of these pages will aid scholars attempting to analyze such connections. In the meantime, readers will be forced to hopscotch over “blank spaces” in order to develop a portrait of a young thinker intent on locating the particular “terrors” of human history in terms of a broader, abstracting understanding of “history” that will later be developed into the notion of “sacred time” and “eternal return.” In these pages, however, young Eliade is able to read his wife’s death as an act of God “to make me think in a creative way, that is, to facilitate my salvation”; to wrestle with Kierkegaard in terms of the possible coexistence of Christian and archaic theology; and to observe, without any of the bitter irony today’s readers will see in the comment, “I never would have believed that I’d arrive at metaphysical despair by starting from politics and nationalism!” Indeed, “politics and nationalism” dominate here as they do in contemporary reception of Eliade’s work, “blank spaces” threatening to swallow up the entire oeuvre.