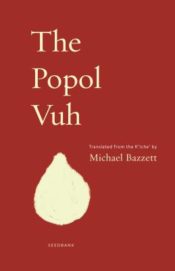 The Popol Vuh, literally the “book of the woven mat,” is equal parts creation tale, hero’s journey, and genealogy of the K’iche’, the indigenous people of Guatemala. Named for where the K’iche’ would sit to hear the story recited by a tribal elder, the work informed the Mayan worldview before their confederacy of city-states fell to a combination of drought, disease, war, and exhausted natural resources. While original Maya script was logographic (the oldest kind of writing) and written in folded codices of fig bark, The Popol Vuh text was written down by K’iche’ elites around 1554-1558; it was probably transcribed from an oral performance in an effort to preserve their history from the destruction authorized by Spanish missionaries. In 1701-1703, Francisco Ximenez, a Dominican friar, copied the work and translated it into Spanish to help priests refute the K’iche’ religion, which he thought Satanic. Hundreds of years passed until the book began to receive attention in 1941, when Adrian Recinos discovered it in the Newberry Library in Chicago. Since then, The Popul Vuh has been translated into multiple languages, and is now considered a classic of world literature. Counter to his intent, Ximenez’s work ultimately gave Guatemala its national book, and preserved the mythological mind of the Maya that he worked to convert.

Michael Bazzett, a contemporary poet, improves upon previous translations of The Popul Vuh in regards to accessibility, fluidity, and lyricism. To illustrate, we can compare translations of the scene in which the Maya Hero Twins Hunahpú and Xbalanqué dance before tricking the Lords of Death into sacrificing themselves. First is Dennis Tedlock’s 1996 prose translation: “And then the hearts of the lords were filled with longing, with yearning for the dance of Hunahpu and Xbalanque.” Then, here is Allen Christensen’s 2007 “literal verse translation”:

One Death and Seven Death
rejoiced in their hearts,
as if they’d done it themselves

as if they’d entered and felt
the pulse of the dance.

Using enjambment, modernizing the syntax, and taking liberties with the text, Bazzett gives us a more vividly imagined poem. Tedlock reads easily, Christensen is the most accurate, but Bazzett makes the Mesoamerican epic come alive, adding clever bits like starting the story’s ritual ballgame with the classic American phrase, “play ball.” Dividing the book’s columns of unlineated prose into four parts, he creates sensible divisions so the creation story bookends the monomyth. Adding chapters where Ximenez placed gaps in his translation, Bazzett gives the reader breaks. Using lines of tetrameter and trimeter, the narrative flows easily, a la “The Rime of the Ancient Mariner.” Bazzett’s decision not to translate the second half of the epic, a tribal history of the K’iche,’ leaves us the most relatable parts of the epic, making it about the length of Beowulf (and one-fifth of the Odyssey).

Although the influence of Christianity is present, the book is not merely a hybrid. The gods speak the world into existence, but only to be worshipped. When the first versions of humanity are deemed a failure, a flood is sent that makes God’s judgment seem like a slap on the wrist. There is a forbidden tree in Xibalba (the underworld), but it has a severed head in it; there is forbidden fruit, but Lady Blood wants to taste it without being tricked; her godlike sons are conceived sexlessly from spittle, and they die so humanity can be (re)born, but they ritually sacrifice and reincarnate themselves to do it! Lady Blood (female sacrificial blood was used to conjure spirits) is like Mary and Eve, but she’s her own phenomenal woman. She’s from the underworld (her father is one of the Lords of Death), so when she becomes pregnant, she has to fake her own sacrificial death to leave, and her actions pave the way for the creation of humanity. So while the Christian elements are visible, the original can be detected readily in the Hero Twins: From their grandmother’s chili broth to their bird-killing blowguns, from Hunahpu’s beheading (by a bat!) to their apotheosis as the sun and moon, the pulse of the tale is Mayan.

With Bazzett’s translation, The Popul Vuh has been reincarnated—not in its original logographic form, nor in transliterated K’iche’, nor in the Spanish of Ximenez, but in a clear, elegant English that allows the reader to visualize the epic adventures of the Hero Twins and the universal story of human creation. It’s a boon for readers everywhere.