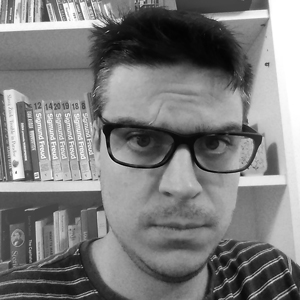 Alfie Bown is a new Assistant Professor of Literature at HSMC in Hong Kong, where I have been a professor for five years. His recent book Enjoying It: Candy Crush and Capitalism (Zero Books, $11.95) seems to have caused a bit of a stir. Just as the title promises, Enjoying It offers readers an experience of pleasure. Viewing enjoyment in the context of modern capitalism, Bown makes the profound question of pleasure accessible and the trend of video game apps intellectually stimulating. The book argues its topic in a light-hearted, witty way without being unnecessarily pedantic, though it doesn’t shy away from applying various critical theories, Slavoj Žižek’s especially, to the exploration and classification of enjoyment.

Reading Bown’s intriguing case studies on productive, unproductive, and irrational enjoyment, I found myself at times unsettled, albeit always absorbed in introspection on my own experience of happiness. For me, the question remains—what actually is enjoyment, and how are we to enjoy cultural production without feeling that our subjectivity is threatened and commodified? What follows is the discussion we had about this and the book’s other resonant themes.

Catherine Wong: A simple question to get things started. In your book you use six cases to study types of enjoyment, ranging from listening to “Gangnam Style” and playing Candy Crush to reading critical theorists and philosophers like Deleuze. Do you enjoy all these things? Why did you choose those as examples in the book?

Alfie Bown: Absolutely, I enjoy all of those things, probably too much in fact. I play Candy Crush, read Deleuze, and have played so much Football Manager that I even dream that game is my reality. It was important to me to study things that I did really enjoy myself. I see quite a lot of criticism of other people’s enjoyment, both in the university and in “left-wing” journalism, and I think there is a problem here: there is a tendency to place value-judgements on the enjoyment of others, whether consciously or unconsciously, and that was something I wanted to avoid in this book. Instead, I wanted to analyze how various kinds of enjoyment operate on us as subjects, how these different kinds of enjoyment affect us in different ways. I guess it’s fair to say that I was the main subject of analysis and that these things are all primarily my own enjoyments, though I did try to think about the general ways in which these things are enjoyed and the effects they have on the “enjoying population.” I also carried out some interviews to see how others enjoyed these things. Ultimately though, this was an analysis of how I found myself constructed as a subject by various forms of enjoyment that I encounter in my own experience of contemporary society. The thing I am most pleased about is that people seem to be applying the models set out in the book to their own enjoyments, which is more than I could have asked for.

CW: In the book, you compare enjoyment in the Victorian era with enjoyment today, which is perhaps rather unusual because we often tend to emphasize the differences, rather than the similarities, between ourselves and the Victorians. Could you say a bit more about why you make this comparison?

AB: In some ways modern entertainment is so radically different from Victorian entertainment, but I am more interested in the similarities. During her history degree, my wife studied a fascinating course on Victorian leisure time. Before that I had known about the 1832 Reform Act, which had attempted to control the potentially revolutionary working classes; at that time England was as close as it would ever come to revolution, as E.P. Thompson has discussed in his famous book The Making of the English Working Class. The Reform Act was designed to stop this happening. What I hadn’t known was that after this, those in power had taken great pains to regulate and control the leisure and recreation of the people in a project called “rational recreation.” The idea was that by controlling people’s leisure, revolution could be prevented. I heard about this all from my wife and it occurred to me that we are in a bizarre second wave of this today: we are a capitalist workforce who are controlled and regulated, made into ideal workers, through the things we enjoy, things which prevent us from asking for change.

CW: To focus on one of the case studies, let me ask you about Candy Crush—the one game you put in the title. You write that Candy Crush somehow makes you work harder and become a more perfect capitalist subject, but if this mobile entertainment promulgates the unproductive, do you think we should all stop playing the game? 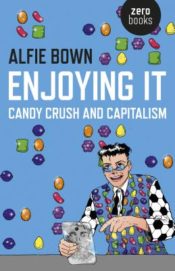 AB: Right, great question. I can follow on from my last answer here. Actually, its kind of the opposite: I am not saying that mobile phone games promulgate the unproductive but that, in a certain way, these distracting games serve the perfect capitalist agenda. A distracting game of Candy Crush, Angry Birds, Temple Run, or Smashy Road might seem like the opposite of productive work and a total waste of time, but I argue that it stimulates a guilt-function that ultimately turns you into the perfect capitalist worker. From the point of view of capitalism, these games are bloody useful (rather than useless, which is how they appear) because they unconsciously make us feel guilty for wasting time and then we go back to work with a renewed passion for capitalist productivity.

In another way I think what you say is totally right. These games are usually played in and around the workplace and I think they are designed to stop people from reflecting on their working conditions and perhaps even to stop people from discussing their dissatisfactions with their colleagues. Instead of thinking about work and what is wrong with it, our frustrations are channeled into distractions such as these. So should we stop playing them? Maybe. Or maybe we should just try to be attentive to what they are doing to us when we do play them, so that we know what we are getting into and what effects they have!

CW: One of your arguments seems to be a bit of an attack on the university. You claim that the university and things like popular culture studies have tended to approach the question of enjoyment in the wrong way. Why is this so? Where is the university going wrong?

AB: That is right. I am very much in the university, and I am a product of it. However, I wanted to work against the way that the university uses popular culture to prove its own points. Popular culture is quite common these days as a subject in the university. Video games, pop music, and sports are all in the titles of new university modules. But the university often just uses examples of pop culture to prove something that it already knew to be correct. For example, a quick look at Lady Gaga proves yet again that Foucault’s theory of sexuality was right. This isn’t interesting, and it reiterates the idea that the university is very clever and can explain everything, especially the everyday things that “the masses” enjoy. I’m completely opposed to this and I wanted to search in the everyday for things that the university does not know how to understand and explain. In particular I wanted to find kinds of enjoyment that don’t make sense in terms of the knowledge we already have, hoping that these would force us to develop new ways of theorizing enjoyment and new knowledge about it, rather than just applying theories and ideas we already have to everything. I do believe that in our enjoyment of things like “Gangnam Style,” Candy Crush, and Game of Thrones, there are unsettling moments that force us to reconsider what we know.

CW: In the conclusion of the book you briefly talk about “illegal” enjoyment. Do you think the kinds of enjoyment that are prohibited in a capitalist society could sometimes be radical anti-capitalist things and that we should transgress and enjoy them? What about enjoyment that might be pleasurable to one individual but might be dangerous or even fatal to others, like some crimes?

AB: This is a great question to finish on and I must say that I don’t have a confident answer here. It was a problem I ran into towards the end of the book, as you say. On the one hand, it seems reasonable to want to break out of some of the regulations placed on enjoyment and to try to disrupt the way that we are organized by and through our enjoyment. I think this is necessary and I think that my main point is that we need to realize how powerful enjoyment is. By analyzing enjoyments, even those which seem totally mindless and uninteresting, we can reveal the fact that enjoyment constructs us and affects us powerfully: it turns us into the people we are. Realizing this, I hope, can unsettle it and stop our enjoyment from working so much in the service of capitalism. On the other hand, I am not saying that we should just enjoy whatever we want. That could lead to the following of all sorts of impulses and passions which, as you say, could be destructive. In fact, isn’t it the case that capitalism wants us to follow every impulse to enjoy that we have?

Grappling with these problems can perhaps help us see the difficult positions we are placed in. I certainly don’t think there is such a thing as radical enjoyment per se, and one of the things I wanted to attack was the idea that it makes you a good radical if you enjoy reading Deleuze and listening to Burial but a poor one if you read Lacan and listen to Taylor Swift. These again are value-judgements that are placed on enjoyment by people who proclaim that one enjoyment is preferable to another. What I think is perhaps genuinely anti-capitalist is seeing what enjoyment can do and how it often affects us unconsciously in the service of capitalism. I’m not saying we should change what we enjoy, but rather, that we should realize how what we enjoy changes us.