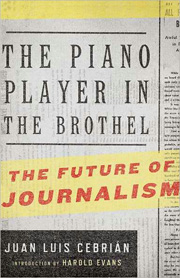 Juan Luis Cebrián, one of the founders of Spain’s leading newspaper, El Pais, was once on the cutting edge of journalism—so much so that in 1981, his publication played an important role in squelching an attempted coup that would have returned Spain to the reactionary backwaters of the Franco era. Cebrián has also served for many years in executive positions at Prisa, a Spanish media group that owns newspapers, radio and television stations, and magazines. Now he’s written a slim volume about the future of journalism.

We might expect that someone with such a rich background in various aspects of media would have a few choice words to say about where journalism is headed, but such is not the case. The book is made interesting by the author’s Spanish perspective and his knowledge of the early history of newspapers. But with regard to social networking, digital media, and even blogs, Cebrián is basically clueless.

To his credit, in the early chapters Cebrián fleshes out the central conundrum of the journalist’s profession. Telling the truth is the essence of the profession. To tell the truth, the newspaper must remain financially independent. To remain independent, the newspaper must sell copies (or generate sufficient revenue from advertisers, whose rates are based on sales). The problem is, the truth doesn’t necessarily sell. As Cebrián writes, “Given a choice, we prefer imaginary stories over truthful stories.”

Thus journalists, editors, and publishers continually weigh the truth of what they write and print against its “objectivity,” balance, and entertainment value. They also make astute judgments, often subconsciously, as to “which way the wind is blowing,” so as not to alienate either their sources or important segments of their subscription base. “It’s a paradox,” he writes. “Newspapers attack the establishment, yet often grovel to it.” And thus it has always been, he says, since the days of the Venetian gazzettanti and the Parisian canards.

Cebrián has some interest things to say about how former Spanish president Anzar manipulated the press during the run-up to America’s invasion of Iraq, and alludes to some personal experiences that would have contributed enormously to the appeal of his little treatise, had he fleshed them out. But once we arrive at the era of the Internet, things truly fall apart. Cebrain makes the startling admission that he simply doesn’t use the Internet, and he compares bloggers to “those who expose themselves on the street.” Can he really be unaware that most major newspapers have blogs as a regular part of their journalistic offerings?

In the end, the best thing that can be said about such remarks is that they exhibit a touching nostalgia, and Cebrián reinforces that impression when he writes: “The community of readers that sits around reading the newspaper has behaviors, sensitivities, and attitudes different from those of network communities. A loyal reader maintains a devotion, solidarity, and commitment to his newspaper that cannot be compared to those of a website visitor.” But if the best journalists are to be applauded as independent seekers of the truth, why should the best readers be loyal, unquestioning followers, passive devotees of this or that masthead, incapable of playing a critical role in deciding what to read?

As a result of his lack of familiarity with electronic media, Cebrián draws the lines in the wrong places between serious journalism and profit-driven demagoguery. Language isn’t crumbling under an onslaught of tweets, and journalists, editors, and news organizations will never become obsolete. For journalists with a conscience, the question is the same now as it was in the seventeenth century: How do you make the truth sell?