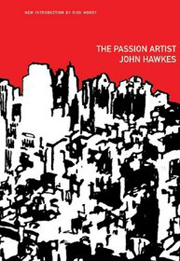 Has there ever been a literary novel as saturated in sex and bodily fluids as John Hawkes’s The Passion Artist? Dalkey Archive’s recent reissue of this hypnotic work, first published in 1979, gives readers the chance to marvel at Hawkes’s unique blend of language and nightmares. The raw, unsettling, politically incorrect tones of the book make it a refreshing monument—a reminder of how daring, fevered, unapologetic writing can brand a reader’s consciousness, complete with a long sizzle of steam.

The Passion Artist is set in an unnamed Eastern European city ravaged by war and destruction: “in the single park the play equipment for children resembled a collection of devices for inflicting torture.” The city’s life revolves around its women’s prison, La Violaine, and the troubled main character, Konrad Vost—a man who thought “he was like some military personage striding with feigned complacency down a broad avenue awash with urine”—finds his mother is inside the prison, his wife is dead, and his teenage daughter is estranged. When a riot breaks out at the prison, he volunteers with other men to quash it, but they fail, resulting in Vost’s capture. It’s an apocalyptic novel more grimy and haywire than Cormac McCarthy’s The Road, where even dogs are monstrosities: “it carried an old spring-operated wooden clothespin sticking at a comic angle from its small toothless mouth. Something had misfired in the docking of the tail, which, curled briefly above the rump, was naked at the tip and revealed there a spot of wet pinkness very like the tiny anus that was always exposed.”

The novel’s title can be considered highly ironic. Throughout the book, as childhood memories of his mother killing his father and his punishment at an orphanage of sorts torment him, Vost is engaged by seductresses of all ages, including a teenage girl he pays for (“the girl’s face was buried in his disheveled groin. It was as if her head had become suddenly the head of a young lioness nuzzling at the wound it had made in the side of a tawny and still-warm fallen animal,”) and a women from the jail both during and after the revolt. Yet Vost is more the object of passion’s nemesis—inertia. All the women in his life and in society have turned against him, and some of the almost ritual scenes of sexual domination of Vost by each of these women—including a tall, red-haired femme fatale who accompanies his mother as they patrol the prison—produce a disjointedness as traditional masculinity is upended.

Aside from its transgressive content, The Passion Artist amply displays Hawkes’s trademark ornate, inventive prose—the aforementioned tall woman’s red hair is “so dark it resembled the meat of plums,” and a derelict landscape is colored with umbral tones: “the strong cold salty air was impossibly heavy with the smell of human excrement and of human bodies armed and booted and decomposing under the ferns, behind piles of rock, in the depths of wells.”

One can forget that Hawkes is simply describing air here, first imbuing it with three plain but solid adjectives before letting it trail an olfactory blanket that cinematically tracks backward so the sources of decomposition and death are highlighted. With Hawkes, things happen in such extreme slow motion, as so many colors and sensations of smell, taste, and touch appear, it is like seeing Monet’s painting of lilies while sitting by the actual lilies, feeling the sun that touched them and Monet and smelling the air they all breathed.

Certain novels showcase how writing can jab, fluster, and puncture—how fiction can be unafraid to put readers in precarious positions, where they have to scramble to survive the living nightmare of existence.The Passion Artist is undoubtedly one of these books, and it is a pleasure to have it restored to print.