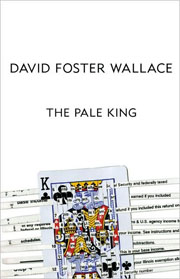 Although the center of David Foster Wallace’s unfinished novel,The Pale King, does not hold, the writing itself still fascinates. Certainly there were challenges in bringing this final Wallace doorstop to print. Michael Pietsch writes in his Editor’s Note that before his suicide Wallace left “a neat stack of manuscript, twelve chapters totaling nearly 250 pages,” and also material from “hard drives, file folders, three-ring binders, spiral-bound notebooks, and floppy disks [that] contained printed chapters, sheaves of handwritten pages, notes, and more.” Pietsch describes arranging all this diverse material, much of it written in freestanding sections, as “the most difficult part of editing The Pale King,” and the strain frequently shows. For example, Chapter 1 is a prose poem of Midwestern landscape— it’s great writing, but it feels like it could have been pasted anywhere in the text. Chapter 3, on the other hand, which consists of a two-page conversation between unidentified speakers on masturbation, seems to fit nowhere in the text, and feels more like an outtake from Infinite Jest than anything new from Wallace. Amidst such chaos, the reader cannot be sure which of the resulting inconsistencies and lacunae are editorial gaffes and which are Wallace’s own self-conscious, postmodern narrative disruptions.

The novel really starts in Chapter 2 with Claude Sylvanshine’s airplaning toward Peoria, Illinois, for his promotion at Internal Revenue Service Post 047, the Midwest Regional Examination Center, circa 1985. Sylvanshine is a “fact psychic,” and this vignette is the most hilarious section in the book; while Sylvanshine is at a training session on rental property deductions, he experiences “data incursions of the annual rainfall in Zambia for even-numbered years since 1974.” In another chapter, we meet Leonard Stecyk, an obnoxious boy genius (the picked-on-in-shop-class type), only to read later of his gradual stultification in the IRS, where he does not shine. Also not shining at the IRS is the David Wallace character, “age forty SS no. 975-04-2012,” and Lane Dean, Jr., who impregnates his girl on a picnic table, dutifully marries her, and supports her with his government job. We meet Toni Ware and Mother Tia, trailer trash mother daughter prostitutes, but how they tie in with the main IRS plot never comes clear. Then we skip to “the boy,” not identified until later in the book, when we connect that the “wiggler” (or tax form examiner) who sweats a lot and has anxiety attacks is David Cusk, who we first encountered as an anxiety-ridden high school student. And at the top of the ziggurat sits Mr. DeWitt Glendenning, Jr., arguably the Pale King himself.

You get the idea? It’s a collage, a pastiche of vignettes, and it’s one character after another, albeit backstoried in substantial depth and living color. It’s just that they don’t connect. Even on page 444, we are meeting newly introduced IRS examiners at an after work happy hour, Shane Drinion listening to Meredith Rand for sixty-five pages about her problems—self mutilation and the psychological effects of being beautiful and disturbed by it. The book, at this pace, would probably have ended up with a word count in the Clarissa zone had Wallace been able to finish it, and it might have achieved the grace of something like John Dos Passos’s USA, the characters like spokes in a wheel radiating outward from the IRS center in Peoria.

Still, there is much to recommend the vignettes as they are. The novel smartly addresses the issue of the average hockey mom not knowing how many senators her state has, tracing the history of civics: a 1950s requirement, a ’60s elective, a ’70s pipedream, an ’80s irrelevancy, eroding into today’s incorporated corporate if-I-want-to-rebel-I-can-buy-it attitude. The narrator muses with nostalgia on his own adolescence amidst these times, and this section is highly amusing, as if breathing out bong hits from a rancid couch with the Wallace character. His college days consist of even more wasting away watching soaps, but an accounting class provides the way for the waste case to drift into the IRS recruiting station in “Chicagoland.”

Although the David Wallace character speculates on the nature of dullness and attention, the book is not about boredom or self-help, nor is it the author’s veiled suicide note (sure he mentions suicide, but he also mentions picnics). It is, rather, a deconstruction of the word boredom, which results in the conclusion that the word invented itself, offering the splendid takeaway: “If you are immune to boredom, there is literally nothing you cannot accomplish.” Despite being unfinished, The Pale King demonstrates that Wallace took this credo to heart.