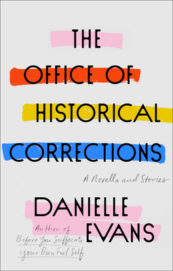 Danielle Evans’s The Office of Historical Corrections is an unflinching perspective on the most polarizing issues facing the U.S. today. Through six short stories and a novella, Evans’s protagonists—savvy, hell-bent, unapologetic women survivors—wrestle with the disparaging realities of socioeconomics, race, and gender.

The stand-out story is “Alcatraz,” where we meet Cecilia and learn about her bi-racial mother’s fight for financial reparations regarding Cecilia’s white great-grandfather’s wrongful imprisonment at Alcatraz during World War I. When the last hope for justice snuffs out, Cecilia attempts to provide closure through a reunion with estranged family members at the prison, now a tourist destination. Cecilia’s tattoo, referencing a Faulkner quotation, resonates with the pivotal role history plays in not only this piece, but every story in the book: “The past isn’t dead. It isn’t even past.”

As a whole, The Office of Historical Corrections speaks to the importance of race in U.S. society—past, present, and future. But equally powerful, and potentially overlooked, is Evans’s candid examination on the consumptive power of grief. In “Richard of York Gave Battle in Vain,” photojournalist Rena does her level-best to negotiate a tenuous bridal party weekend. Evans examines the roots behind Rena’s risk-taking lifestyle:

People have asked Rena why she goes to such dangerous places, and she always wanted to ask them where the safe place is. The danger is in chemicals and airports and refugee camps and war zones and regions known for sex tourism. The danger also sometimes took their trash out for them. The danger came over for movie night and bought them a popcorn maker for Christmas.

The prose is somewhat discursive in “Anything Could Disappear,” but it’s a gutsy piece of writing that is hard to put down, as we watch twenty-something Vera’s search for reality within a borrowed fantasy. When a toddler is abandoned on the bus seat next to her, rather than seek the authorities, Vera says nothing. What follows is a psychological minefield as she (and the reader) try to reconcile whether Vera is this child’s ally or abductor.

A departure in style from the other pieces, “Why Won’t Women Just Say What They Want” is an entertaining, absurd parody about a nameless artist’s self-serving attempt to make amends to all the women who ever orbited his sadistic planet (and there are quite a few). While this story is dark comedy at its best, it is also a chilling reminder about the shocking exploits brought to light by the #MeToo Movement.

The novella, “The Office of Historical Corrections,” introduces us to Cassandra, a pedantic field agent with The Institute for Public History, a fictional government agency charged with setting the historical record straight in “the contemporary crisis of truth.” Like Cassandra’s Greek namesake, truth-telling proves something of a curse, a situation that only escalates when asked to rein in former agent and childhood frenemy, Genevieve. In her role as mediator, Cassandra gets thrown into a decades-old murder investigation in small-town Wisconsin. An intriguing whodunit, this piece affirms the tactical role the historical record can play regarding reparations and raises incisive questions that resonate long after the last page. Chief among them: Can the truth make a difference?

Evans’s imaginative narratives possess an uncanny ability to unpack controversial issues like gentrification, misogyny, and white privilege. The collection is nothing short of a masterful accomplishment, a negotiation between art and activism that dares to foster belief in the existence of a “last best hope.”