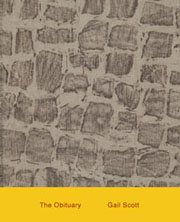 In “The Art of Fiction,” Henry James posits that the novel “must take itself seriously for the public to take it so.” Gail Scott’s most recent work, The Obituary, proves that not only should the novel itself take itself “seriously,” but the novel as a form must also challenge the public to re-imagine what “seriously” looks like. As Scott writes in “The Sutured Subject,” the job of the contemporary novel is to take the shape of “writing that enacts, that is prose, yet poetic in the most material sense.” In The Obituary, this translates to a reading experience that asks us to engage with a voice that holds many voices and languages, a story told through other stories, a text that instead of translating language to language, takes the singular voice we look for in narrators and transforms it into a cacophony of sound and cityscape.

The Obituary demonstrates Scott’s incredible deftness with the prose form, as well as her willingness to go where most prose shies away from—to the silences inside one’s own self, to internalized conflicts of class, family histories, and race. The book begins with a quotation from Abraham and Torok’s psychoanalytic masterpiece, The Shell and the Kernel: “What haunts are not the dead but the gaps left within us by the secrets of others.” As an epigraph, this passage gestures towards an engagement with transgenerational transmissions of memory and silence, but the book’s greatest accomplishment is the way Scott does not turn to literal memory or flashback in order to grapple with a character’s past or lineage. Instead, we get “our novel beginning drenched in the acerbic, therefore subject to countless deviations + only slowly anteriorly, releasing its elixir.”

Likewise, Scott asks, “Are we not all prostheses? Moulded by circumstantial evidence?” A “prosthesis” is an apparatus that replaces something that is missing, something that has been lost. In an interview with Lianne Moyes, published in Open Letter 9, Scott says, “a whole life happens at the level of the city, ‘under’ which are other unspoken presences.” That which goes “unspoken” is the core of the text. In a footnote, we’re provided with the following: “No human lineage is certain. The family, like so many, fading on purpose quietly into background. Only answering when questioned: we know nothing beyond X generation.” The point of this undertaking is to challenge readers to deal with the implications of assimilation, to take on the embedded or haunting, and Scott models this through her narrator. The speaker (Rosine) grapples with her own roots through branching into a multitude of selves, each contributing to a certain portrait of a lineage submerged. The idea that “we know nothing beyond X generation” rings true on so many crucial levels—a city’s archive, an individual’s genealogy, a building’s blueprint.

Scott’s previous novel, My Paris, closes with “Towards boarding gate—I turning. Once. Looking—,” which leaves most readers feeling breathless, and radically included in the speaker’s diary, daybook, travelogue. The Obituary had a similarly intoxicating effect, but instead of “looking,” we’re left with “Laughing + saying—Eeeeeeeengleeesh?” Even the book’s conclusion is an inquiry into the languages we use to interact, and the fact that they do not all take the same shape. And, perhaps most importantly, the text closes in speech, in sound, reminding us of Beckett’s famous adage, “what matter who’s speaking.” Scott reminds us that the speaker is what matters, and that fiction is not speech.