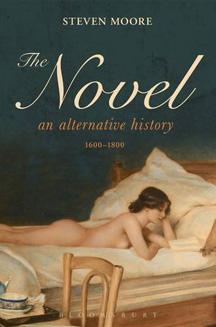 Steven Moore spent the first volume of his The Novel: An Alternative History obliterating the common notion that Don Quixote was the first novel; it’s thus appropriate that the second volume begins with Cervantes’s opus, so that its far-reaching influence can be seen on so many of the novels that came after it. Moore’s argument is that Don Quixote is the first modern novel, not chronologically, “but in the sense that it marks the transition from the medieval worldview (unscientific, faith-based, Ptolemaic, tradition-bound, authoritarian, certain, static) to the modern.” He notes, “Don Quixote is all about the influence of books on life and the crucial importance, therefore, of choosing wisely among them,” which is also a theme of Moore’s work. The immensity of Moore’s accomplishment with this volume can’t be understated: he packs 200 years of world literature into 1,000 pages. Grouped by language (French and English make up the bulk of the work, though there are sections on German, Chinese, Indian, and others, including novels written in Latin, which is what the most educated wrote in, a decision that would doom them to obscurity), Moore writes capsule reviews of hundreds of novels, some as little as a paragraph or two, while others get many pages. Some of the works he discusses haven’t been translated into English, so he bases his write-ups on available scholarly works, biographies, excerpts in anthologies, and third-party mentions.

His chronological reading of these hundreds of books leads to observations that might otherwise be difficult to see: “I’ve often noted during this history of the novel that the appearance of a massive masterpiece tends to silence the field for a while.” Moore identifies the major examples of all the literary trends and genres for each language or region, then the inevitable sequels and imitators. The reader will have to keep a notebook handy in order to make a list of books to seek out as she moves through the text. And there are so many tantalizing ones discussed:

One could go on and on. It’s fascinating to read about wildly popular genres of old, such as the French roman heroique, a “moribund” genre with “flat characters and supersized adventures,” mostly read by the idle rich. Moore claims that “these gigantic novels form a mountain range in the middle of 17th-century French fiction that must be scaled before reaching the more interesting novels on the other side.” La Calprenede was a major author in the genre, publishing Cassandra (3,000 pages), Cleopatra (2,500 pages), and Faramond (8,700 pages).

Moore’s work is exhaustive, but never exhausting, and his writing is witty, engaging, and accessible; he never gets bogged down with academic snoozery, and makes welcome use of slang and humor to punctuate his major points. The result is that the reader becomes just as excited about Moore’s project as Moore is, finding out about so many works, from novels you’re already read, to ones you know you should have read, and to the hopelessly obscure. There are great lines on every page, but here’s a small sample:

Although by necessity the serial-review style is the perfect format for most of the novels discussed, Moore’s sections on certain writers or types of writers tend to be quite long. These include Cervantes, Samuel Richardson (whom he doesn’t really like), Fielding and Sterne and Swift (whom he very much likes; Moore includes a four-page list of novels influenced by Tristam Shandy), as well as De Sade, Jean-Paul Richter, French libertine writers, and a very interesting section on women novelists of the early 18th century: Eliza Haywood (“bodice rippers”), Penelope Aubin (“R-rated Sunday-school lessons”), Jane Barker (“a star in the history of alternative fiction”), and Charlotte Lennox (her Henrietta is “a smart novel about a smart woman”).

From The Adventures of Simplicius Simplicissimus (the birth of the modern German novel) to A Dream of Red Mansions (“the greatest novel in Chinese literature”), to The Corrupted Ones (“the ugliest French novel of its time, relentless in its depiction of the miseries caused by an undisciplined sex drive . . . and daringly realistic in its representation of life among the lower classes”) to The Adventures of Eovaai (“the most interesting English novel of the 1730s”), The Novel: An Alternative History, 1600-1800 catalogs and reviews more books than most people will read in a lifetime, works of immense importance not only to the history of the genre, but to human cultural history as well. Moore’s achievement is staggering, and this latest volume of his project only whets the appetite for the next volume to come.