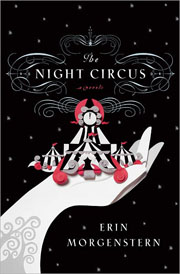 Authors, at their best, are illusionists. They shuffle language like cards, draw plot twists from up their sleeve, and misdirect your attention to the dancing girls while the denouement appears on the page. The last several years have seen a number of books, for adults and children alike, with magic at the forefront, and those that make a mark are talking about more than just the dazzle of spells and the glamor of enchantment.

Spanning the late 19th century into the early 20th and criss-crossing the globe, Erin Morgenstern’s The Night Circus starts when a stage magician named Prospero is delivered an unexpected parcel: the young daughter he never knew, sent to him on her mother's passing. Prospero's stage act plays a double bluff; while other stage magicians pass off their trickeries and gimmicks as supernatural power, his abilities are real, disguised as mere entertainment. His daughter Celia appears to have inherited some of his aptitude, and he sets about training her. It is not an altruistic decision, as the appearance of a longtime acquaintance of similar ability prompts a competition between the two, to set their protégés against one another.

The contest, as it were, takes a different form than expected. Rather than hurling fireballs at one another or summoning deep beasties from the sea to ravage and attack one another, the competition is played out in a circus. It's a game of one-upmanship to see who can craft the more elegant illusions and constructions. The "wizard duel" takes the form of an artistic competition. When Celia crafts a candlelit wishing tree, her opponent, a former street urchin named Marco, responds with a garden sculpted entirely of frosty ice.

What unfolds across years, continents, and lives, is more than just a mysterious fantasy with rich imagery. In a sense, Morgenstern is writing about the creative life. As Celia and Marco's challenge continues over the years they are faced with many of the same anxieties and struggles as artists. Can I do better? Are my ideas still fresh? What am I doing this for? The blowback of the challenge spreads to the lives of those nearby as well. Lives are ruined and lost, but lives are enriched and begun as well.

Like every book of recent years which deals with magic in the modern era, The Night Circus has been compared to the Harry Potter series. On the surface, this doesn't seem to extend beyond the common plot element denominator of characters who use magic. But on reading, the elements which would prompt such a comparison (beyond the fact that it makes for a convenient hand-sell in book shops) becomes apparent. There is the attention to the presentation of wonder, the distinct supporting characters (who at times overtake the narrative, as the ripple effects of Celia and Marco's gambit spreads beyond their contest), and most importantly there is that sense that as you are reading this story about a magic circus and dueling wizards, Things Are Not As They Seem.

In the book, the circus inspires its own fan culture, people who call themselves reveurs and dress in the show's trademark black and white, with a dash of crimson thrown in. It's easy to expect the book's fans to adopt this fashion sense as well; it is much more easily deniable than a Hogwarts cloak, and easily amenable to one's own fashion sensibility. In a sense, The Night Circus is just as amenable to its reader's literary tastes. There are those who will enjoy it for its air of restrained mystery, those who will be enchanted by its imaginative descriptive vocabulary, and those who feel their hearts pull along with the characters as lives and loves are torn when they are not outright broken. In the words of Herr Thiessen, journalist laureate of the reveurculture: "We add our own stories, each visitor, each visit, each night spent at the circus. I suppose there will never be a lack of things to say, of stories to be told and shared." So as the barkers of old used to call out from the ticket booth: There's something here for everyone; reserve your seat today!