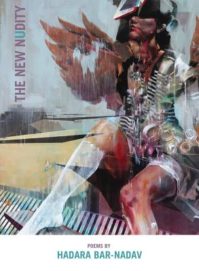 Hadara Bar-Nadav’s The New Nudity is a book of riddles, one of the oldest literary forms. The poems examine objects like “Wineglass,” “Spoon,” and “Piano.” Most titles in the book have this one-word, concrete noun format, with only a few variations. The chosen topics may seem, at first, quotidian, but they valorize and illuminate the process of language. Titles of the poems give away the answers to the riddles, so the word play is about the inventiveness of definitions, those approximations of size and shape, as in “Thumb”:

Who means what it is to be human
and is scarred by childhood.

Thick and neckless. Your head shaped
like a gravestone.

A smile opens across the knuckle and disappears
every time you lift a tumbler of scotch.

Who holds a pen and lies.

The distinctive human digit must work in tandem; isolated, a thumb is bizarre, even grotesque. The nail is the shape of a “gravestone,” and so inutile. Wrinkles in the thumb’s skin, from a foreshortened point of view, resembles a smile. The true and literal view of a “thumb” gets lost in layers of description. The thumb of the poet herself distorts as she grips the pen, so altering with “lies” the idea of a thumb.

Metaphors accumulate throughout the volume in a new syntax, so they become singular, as when the speaker in “Bridge” finds “Wire spokes / through speech” and notes “I don’t want / to play the harp.” The distorted scale, reducing bridge’s cables to the size of a harp, creates a startling comparison. And not using the article “the” in the title makes this more indefinite—and dynamic. None of the titles has an article, which adds to their suspension in a mythic-like time.

Like Daniel in the Old Testament, Bar-Nadav is an interpreter of the realm of dream and imagination. The poem “Gypsy” demonstrates this, with a submerged narrative about a birch tree with gypsy moth eggs. The poet gives the tree gender—“Sever her arms one / by one. Cut the moths // from the white clot / of heaven.” This could be a Hansel and Gretel forest scene. The poem folds inside-out several times; the images recur in sequences similar to the jumbled narrations of dreams. In the poem, however, a closure occurs, even if incomplete, with the connections among white images: “You found her pearl-pale, / lying on the sidewalk // her head opened, / opening, // like the unborn / gypsy moths, torched // in their white beds.” The emphasis on the verb “open” and its shift from past participle to present participle moves the poem into present time, while it continues to exist in the past.

The New Nudity has surprises on every page. It interrogates many strategies of writers, and so it reads like a master lesson in poetics. The poems are about questions more than answers. Metaphors surprise but are not contorted as they expound upon physical reality and expand it into myth. Bar-Nadav teases out basic elements of physical entities— “Balcony” or “Jar”—until she reinvents alternate realities.