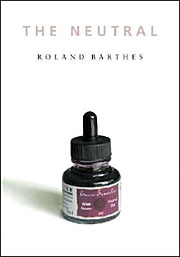 What if, wonders Roland Barthes, in response to one of those “large, pompous, arrogant, pedantic questions” which so dominate intellectual and especially academic life—“‘Is there a writing specific to women and a writing specific to men?’ ‘Do you think that the writer seeks truth?’ ‘Do you think that writing is life?’ etc.”—one were to answer “‘I have bought myself a shirt at Lanvin’s,’ ‘The sky is blue like an orange,’ or… if this question is put to you in public, you stand up, take off a shoe, put it on your head, and leave the room...”

Such refusal and retreat—“the violent action of the [Zen] koan”—offers an example of Barthes’s subject in this lecture course. The Neutral is that which “baffles the paradigm,” suspending the conflictual basis of discourse by outplaying the various binaries (gender, subject/object, active/passive) ordinarily imposed by language. Barthes traces the Neutral through dreams of self-destitution or withdrawal from the world, finding its echo in Proust’s experience with the madeleine, “something like a Western example of satori.” The Neutral can refer to “intense, strong, unprecedented states… an ardent, burning activity” and to “‘slow understanding’: a kind of drip-by-drip understanding of problems,” and that intoxicatingly vivid, crisp-edged perception brought about by urban dusk, the hour in which “tiny, perfectly futile details of street life” are received with stirring purity and “the pleasure of being alive.” “I don’t construct the concept of Neutral, I display Neutrals,” Barthes says of his approach. It is not a definition he is after, but a gathering of instances.

The book is a transcription of a course painstakingly prepared in notebooks and index cards, a series of lectures proceeding through a “sequence of fragments,” specific figures or traits considered in turn. Examples of the Neutral are sought “not in language but in discourse,” and in this process Barthes meanders through an astounding array of texts, his citations laced with pleasure—all taken from the library of his vacation home, “a place-time where the loss in methodological rigor is compensated for by the intensity and the pleasure of free reading.” He considers the signifying silence of mysticism, Sade’s dirty laundry, the aesthetic rules of the tea ceremony, Swedenborg’s solitary writing rituals, relevant threads of Kafka and Blanchot, even the post-mating exhaustion of the Alaskan fur seal. Yet Barthes cautions—neutrally—that his “knowledge is never cohesive”:

I know nothing and do not pretend to know anything about Buddhism, about Taoism, about negative theology, about Skepticism: these objects, insofar as they are doctrinal, systematic, historical bodies, such as one might find in histories of thought, of religions… I am outside mastery. . . My aim = to be neither master nor disciple but, in the Nietzschean sense. . . ‘artist.’

This exemption from the responsibility of contextual knowledge is echoed in another exemption, from immediate exchange or dialogue—what Barthes refers to as the “theatrical” “jousting” of the seminar, which the logistics of this giant lecture class do not allow. Instead, Barthes’s practice of responding to select written comments at the start of sessions exemplifies what might be called a textual pedagogy, one in which the teacher is a text, not so much answering or conversing as echoing or, at best, responding. In reference to an angry anonymous note, Barthes observes “commentary, criticism, writing might in fact be the way to answer him who wants me not to answer”; the work of “actively reading” exorcizes “the relation of power” that speech imposes. Yet this is not abstinence-only education but, rather, a practice of particular and pointed refusals and an insistence on the responsibility—political and ethical—of such refusal. Barthes cites the wisdom of Eurylochus, that disciple of Pyrrho who, “hard pressed by his pupils’ questions that he stripped and swam across the Alpheus.” This “gesture of the nonreply,” what Barthes hears as the “Ciao” of Eurylochus, exemplifies the Neutral, and—so argues this book, in Barthes’s typical erudite and sensuous fashion—suggests an urgently needed corrective to our current state of being in the world. For Barthes, the search for the Neutral is “my own style of being present to the struggles of my time,” and, ultimately, an “ethical project,” an elaboration of Barthes’s larger engagement with writing, discourse, ideology, and culture.

John Cage once said that he tried never to want anything except “in a set of circumstances where nothing I decide seems to me to concern others.” He tried, in short, “never to refuse anything,” though he could, in a restaurant, select chicken instead of steak. Barthes cites this of course, reveling, as he always does, in the culinary anecdotes of artists, but he sees here something of the Neutral too, what in Taoism is called “wou-wei,” non-action, that “what baffles, dodges, disorients the will of life. It’s therefore, structurally, a Neutral,” akin to the Zen “answers” mentioned earlier. The desire here is to abstain from choosing, to be granted exemption from having to hold a position, a belief.

These days, for an intellectual to say “I don’t know” or “I refuse to judge” is “as scandalous as an agrammatical sentence.” Such statements simply do not “belong to the language of the discourse.” The intellectual “is required, summoned to have an opinion on everything, which is to say to be interested in everything,” but Barthes desires the ability to “post a sign on my premises or on my intellectual project: ‘Judgment closed for annual leave.’”

Barthes’s desire doesn’t play into the hands of the hegemony but, rather, voices a critique of an age saturated with information. “I would say: the more information grows, the more knowledge retreats and therefore the more decision is partial (terroristic, dogmatic).” This push-to-choose is already an ethical and political consequence of contemporary culture, and an unhealthy one. Aristotle’s moderate measure of “the best democracy” as “the one in which the citizen is neither too apathetic nor too participatory” can be read as a profound caution on the current situation. “Political minimalism” would indeed “go against the grain of our current political ideology,” but how refreshing that might be. “We are in an era of political maximalism,” Barthes writes, wherein “politics invades all phenomena” and “political behaviors are radicalized: arrogance of the languages, violence of the acts: political totalism all over (without necessarily speaking of totalitarianism).” In the thirty years since this was written, the situation has only worsened. For Barthes, to “live according to nuance” is the only ethically responsible option, and understanding and being Neutral is a critical component to this sort of life.

The Neutral includes the difficult task of admitting one’s own fear, the harsh recognition of banality within oneself, the “right relation to the present, attentive and not arrogant,” but the talk of retreat from decision and the constant focus on revelry in pleasure might deaden American ears to Barthes’s radical political engagement. It would be a grave misreading to see Barthes’s work as solipsistic, although there is, to be sure, an elaborate coyness to his presentation as well as a guiding faith—as Susan Sontag as brilliantly argued—in the value of pleasure. Intellectual caution thus couples with a desire to savor, resulting in such remarkable images as this, from his autobiographical text Roland Barthes by Roland Barthes: his work, he says, is like a cube of sugar dipped into a tea cup as he enjoys a precious bourgeois ritual with his mother. American readers may miss, as well, the contrarian tone of Barthes’s phrasings. His nuances are well-steeped and designed to be taken slowly. On the formal level his texts are corrective, crafted to resist the co-optation of readiness, the placation of easy use. The world, thick with oppression, requires much consideration and very careful action. This is his mission as a writer and teacher, and it is manifest on every page of The Neutral. Indeed, Barthes finds a predecessor in Montaigne—who, at forty-two, “had a medal struck, with a scale on one side and a Pyrrhonian motto on the other: ‘I abstain.’” As Barthes notes, herein is a powerful lesson about the balanced, engaged life:

one should carefully consult Montaigne: his life and his work, to spot from what or where he did not abstain (because he was a man very engaged with his time and publicly engaged): that is to say, not to revise but to refine the Sartrean doctrine of commitment, handled for twenty years by intellectuals, a bit brutally.