Translation and Adaptation in Normal People, The Story of a New Name, and Unorthodox: The Scandalous Rejection of My Hasidic Roots

After Parasite’s win for Best Picture at the Academy Awards last year, Korean director Bong Ho asked in his acceptance speech for American viewers to “overcome the one-inch barrier of subtitles.” Global literature, likewise, now offers more than ever if readers can accept the added presence of a translator. Some U.S. readers have been receptive to translation, and a few major international books have become bestsellers in the States, like Karl Ove Knausgaard’s My Struggle, Elena Ferrante’s Neapolitan Novels, Han Kang’s The Vegetarian, and Olga Tokarczuk’s Flights. In recent years several books originating in the U.S. have also found an audience through their ability to deviate from a predictable, Western plot, including Louise Erdrich’s National Book Award-winning The Round House, Valeria Luiselli’s The Story of My Teeth, and Marlon James’s Black Leopard, Red Wolf.

This spring has seen several limited television series adapted from books, each of which tell stories from languages and cultures outside the American mainstream: Ireland’s Normal People (Hogarth, $17), Italy’s The Story of a New Name, (Europa Editions, $18) and Hasidic Brooklyn’s Unorthodox (Simon & Schuster, $17). These three adaptations have made several meaningful choices to remind viewers where their stories sit in the world. All three demonstrate that adaptations of translated books now have little interest in going out of their way to pander to a U.S. audience, and more interest than ever in calling attention to their roots.

To start, a little summary. Normal People is based on Irish novelist Sally Rooney’s sophomore novel of the same name, published in the U.S. in 2018 and an immediate bestseller. Normal People tracks the ever changing relationship between Marianne and Connell, first as secondary students in County Sligo and later against the background of Trinity College in Dublin. Their Irishness remains iridescent while their feelings for each other morph and rearrange. The Story of a New Name is unmistakably Italian; as with Elena Ferrante’s other Neapolitan Novels, it spends no time on softening the harsh realities of young girls growing up in a poor Neapolitan neighborhood, instead focusing on Lenú and Lila’s ever-changing friendship from elementary school through their sixties. The Story of a New Name picks up after Lila’s marriage at sixteen. While Lenú continues as a gifted student in high school, Lila finds herself surrounded by local crime and a violent marriage, and both of the girls find distraction and teenage infatuation in Nino, Lenú’s classmate. Unorthodox allows viewers a look inside the deeply insular Satmar Hasidic dynasty in Williamsburg, Brooklyn, by showing Esty’s sudden flight from the community after a disastrous arranged marriage. The show’s storyline is loosely adapted from Deborah Feldman’s 2012 memoir, Unorthodox: The Scandalous Rejection of my Hasidic Roots, which chronicles her dysfunctional marriage and later exit from the community. Esty arrives in Berlin like a deer in the headlights, and the series delights in her discovery of secular frivolities like cappuccinos, pants, lipstick, and techno raves while flashing back to her life in Williamsburg and her decision to flee.

Mixed into each of these adaptations is the deep importance of language. My Brilliant Friend: The Story of a New Name, which airs on HBO, is one of the first major U.S. television series entirely presented with subtitles. Unorthodox is Netflix’s first series predominately in Yiddish, and the episodes are split between languages both in speaking and subtitles in a similar way to how Feldman’s memoir offers italicized Yiddish words on every page. Normal People, which is being aired on Hulu in the U.S. and the BBC in the UK, doesn’t take time to explain Ireland to its viewers, whether it’s how far Sligo and Dublin are from each other or how applying to college works there. 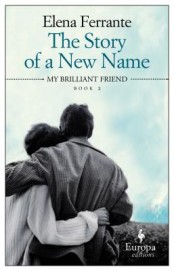 Each of the series grapples with the difficult—and at times impossible—nature of translation in a different way. As readers of the novel may remember, The Story of a New Name contains some of the longest separations between Lenú and Lila. Lenú narrates the episodes as she does the novels, and she is only able to chronicle Lila’s reality after reading her friend’s journals. Lila’s magnetism to Lenú is hard to pinpoint throughout the books, as it moves between a fascination with Lila’s prodigy in grade school, love in a world with little warmth for them, and bitter rivalry. Lenú later finds herself unable to write without her prose undercut by Lila’s voice, and their identities and choices at times are chaotically entwined. Consider the Matryoshka-like process of storytelling at work here: Lila writes the journals, Lenú presents them to the reader, these are translated for an English-language audience, they are adapted for screen by screenwriters, actors, and directors, and then they are given English-language subtitles. Unlike the novel, television adds an element to the portrayal we see of Lila, which feels like a flashback rather than Lenú’s retelling. The novel offers a layer lost on screen.

Meanwhile, Yiddish words remain untranslated in Unorthodox, appearing italicized in the subtitles. Their meanings are never explained for viewers. When Normal People was released in the U.S., it retained Irish vocabulary (culchie, press, lads) with changes to spelling. Many of the earlier episodes of the series were written by Rooney herself with a similar approach: The characters constantly speak in a distinctly millennial pish-pash of Irish slang you either get or miss. All of these adaptations accept that the exporting of a story is a messy business, choosing to include moments of confusion and admitting some words have no equivalents. 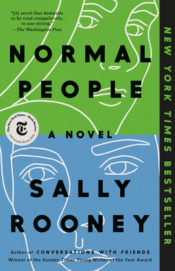 Normal People, The Story of a New Name, and Unorthodox each have moments where they simply refuse to translate for viewers, forcing their (largely) American audience to remember these stories come from somewhere else. In Normal People, Marianne’s older brother tells her she shouldn’t be seen with Connell, who he calls a knacker. For an American audience, this word might seem interchangeable with asshole or douchebag, in the same way that the dance at their secondary school, the debs, feels interchangeable with prom. Lost entirely are the racial tinges of the term cast towards Irish Travellers. An American viewer would simply know that Marianne’s brother looks down on Connell, which isn’t too hard for us to understand, since Rooney makes clear the social divide between Connell and Marianne; they meet because Connell’s mother cleans Marianne’s house. The intricacies of the term, what it means with regards to social class and ethnic identity, are left untranslated for an American audience, and perhaps lost.

In the first scene in Unorthodox, Esty is told she can’t leave her apartment with a bag because the eruv has fallen, so she returns to her apartment and leaves her bags, fleeing with only what she can slip in her clothes. We’re not told how what looks like an electrical wire dictates what Esty can carry. The show goes to lengths to convey the shock involved in joining the secular world as a sheltered Esty encounters a modern Berlin with accessible abortion, same-sex relationships, and Holocaust jokes, but the series doesn't stop to explore the meaning behind many of the customs found in her Hasidic upbringing (like bald brides and ritual baths), forcing us to accept their reality without understanding their motivations.

The only series set in the past, The Story of a New Name depicts Italy at a moment of cultural change. Unlike the first installment, My Brilliant Friend, where the neighborhood remained insular and the girls were only aware of their immediate community, both Lenú and Lila begin to slowly understand the greater world around them and straddle the line between adolescence and adulthood. When Unorthodox and Normal People depict leaving your childhood home, they reckon with the internet, texting, etc., but Lenú has to make calls from the grocery store since her parents don’t own a phone. Moving on from their childhood social positions offers further complications for both girls throughout the season. Both speak a dialect of Neapolitan Italian and their thick accents adhere them to the socio-economic status of their neighborhood even as they reckon with social mobility through education and marriage. The difficulty of their accent comes through in experiences, but linguistically it is drastically softened for a viewer reading subtitles in ways it was not by the book’s eloquent translation by Ann Goldstein. 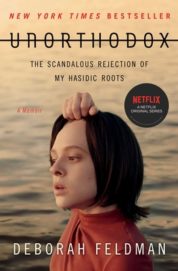 Each of these series centers non-American characters in non-American countries with the exception of Unorthodox, which emphasizes the American-ness of its characters though it is primarily set in Berlin. The enclave of the Satmar Hasidic community remains isolated and poorly understood even though Brooklyn is home to the largest Hasidic population outside Israel. This is clear when Esty’s husband, Yanky, and his cousin, Moishe, check into a German hotel, where they are mistaken for being Israeli. The Satmar dynasty is set apart from other Hasidic communities by being vehemently anti-Zionist, and an offended Moishe slaps down a U.S. passport. Later, to hide their payots, the two men don Yankees and Mets baseball caps. The series goes to lengths to remind us that its characters, and their Satmar Jewish community, are uniquely American. The alienation an audience may feel because of unfamiliar customs is reinforced throughout the series while also being contrasted with the story of a distinctly American Jewish woman.

As so often happens in bildungsromans, the characters in these books-turned-shows find themselves: Connell becomes a writer, Lila takes up reading after being denied education as a child, Esty plans to audition for a musical scholarship after not being allowed to perform, Marianne becomes an intellectual among peers, Lenú becomes a novelist. They become less defined by their families, and the discovery of their agency feels terrifying and thrilling, but these triumphs come alongside the melancholy of maturity. Their stories fit cleanly together, but the choices their translators and adapters make in fashioning their stories for screen set them apart. The decisions of how to center their stories within their languages and cultures remind us of the inherent importance of characters telling their own stories in order to find their freedom.

Click here to purchase Unorthodox
at your local independent bookstore