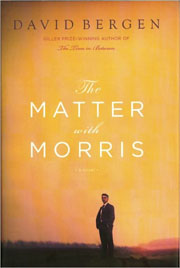 Morris Schutt joins the ranks of fictional midlife crisis sufferers—a group varied enough to include both Moses Herzog and Tony Soprano—in David Bergen’s Giller Prize-winning novel The Matter with Morris. Morris suffers from the typical career and personal problems of the genre, but what makes the novel so fascinating are the ways Bergen has adapted these problems to contemporary society. A syndicated columnist in Winnipeg, Morris used to mine his personal life for stories that he could convey, often in fictionalized form, to make points about life in general. But after his son dies in Afghanistan, his columns lose the humorous optimism readers had enjoyed. Even worse, he fabricates the facts about his son’s death, blaming it on the enemy instead of friendly fire. This lie, and his willingness to share Martin’s death with the public, destroys his relationship with his wife, Lucille, and eldest daughter, Meredith.

Finding himself alone, Morris turns to the consolations of philosophy. Here Bergen wisely avoids the road most traveled by fictional midlife crisis characters. Instead of buying a motorcycle and a leather jacket or chasing after women half his age, Morris asks strangers, “Are you free?” in search of a justification for the war that took his son. Still dissatisfied, he isolates himself further by cashing out all of his accounts and canceling his cell phone. In place of these, he relies on a filing cabinet-sized safe and a landline, though he makes regular trips to a nearby Internet café. Free of the trappings of contemporary society, he digs out the notes from a college philosophy course on The Republic: “if he could understand the bigger questions, questions that soared above his own insignificant world, then he might not be so flummoxed by his own littleness.” But the result of this quest is equally dissatisfying: “he had hoped, in the last month, that he was gaining knowledge. But his reading was making him more ignorant, or at least making him more aware of his ignorance.” Unlike Socrates, who might have been pleased by this realization, Morris feels lost when faced with his own ignorance.

Like most midlife-crisis narratives, The Matter with Morris occasionally strays into the comedic. Reflecting on his and Lucille’s courtship, Morris thinks, “they had taken so much for granted, as if she and he and their youthful blazing condition would last forever and ever. This is how one thinks at that age.” Nothing humorous so far, but Bergen adds one more sentence: “Note, Morris thought, read Hobbes.” The juxtaposition of the personal and pseudo-philosophical pokes subtle fun at Morris’s pretensions. Better to delve deeper into his thoughts than to come to the surface and attempt a reconciliation. When the comedic moves from smaller to larger moments, however, it often falls flat. For instance, Morris’s involvement with Leah, a prostitute and classmate of Martin’s, begins with a humorous recognition scene in his hotel room. Inevitably, Morris soon decides to “save” her, a hackneyed plot strand that ends with an unnecessarily dramatic flourish involving a botched break-in.

It is fitting that this novel’s strengths and weaknesses are so closely linked, as Bergen revels in exposing the contradictions in his characters’ lives. The same Morris who cancels his cell phone because it “has become a soother, an umbilical cord, a clattering intrusion” later gets online specifically to Google himself and ends up editing his own Wikipedia entry. Morris does not recognize his hypocrisy, just as he has no qualms about frequenting prostitutes, driving a Jaguar, and using a personal shopper while referring to average Canadians as “the slaves of modern society.” Perhaps this is Bergen’s point. Morris does not solve all of his problems by the end of The Matter with Morris, but he does acknowledge something important about himself: “he was a doer. An actor. And idler.” It is a testament to Bergen’s skills as a novelist that his warts-and-all depiction of Morris Schutt illuminates all three of these qualities and leaves readers contemplating how they fit into our lives as well.