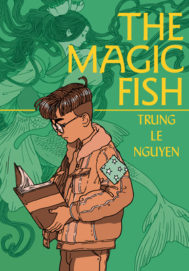 The Magic Fish is everything.

Or—in a less colloquial, wordier way—The Magic Fish is everything I want at the moment in a graphic novel, especially in one meant for both kids and adults to read. This first narrative work from the accomplished Minnesota-based illustrator Trung Le Nguyen folds European and Vietnamese fairy tales (among them “Cinderella” and “The Little Mermaid”) into a braid that also includes realist stories about a second generation immigrant childhood; about parents who do their best and still sometimes fall down; about middle-school friendships that (amazingly) work out; about modern and wartime Vietnam; and—not to be forgotten—about kisses, love stories and happy endings, some of which are gay as all get out. And that’s without even mentioning the line art or color. Nguyen’s debut flew—or swam in the air—from my hands to the very small shelf of all-ages graphic novels I buy in multiples and give to everybody, alongside Laura Lee Gulledge’s Page by Paige and Tillie Walden’s On a Sunbeam. Like them, it’s a thing of surpassing, sweet, credible beauty, at once realistic in its treatment of human emotions and out-of-this-world in terms of what readers can see. Its happy endings (and there are several) could warm up a frozen room.

The Magic Fish begins as a pair of alternating stories. One, told in black and white line art with red backgrounds, follows thirteen-year-old Tiên Phong, who attends middle school with his best friend Claire and their jock friend Julian in 1998. At home, Tiên reads fairy tales to his hardworking, kind, attentive mom, who wants to improve her English; she came to the U.S. as an adult, and now works at a costume rental (modeled on Minneapolis’s Guthrie Theater). Tiên has—Claire realizes—a big crush on Julian: will Julian reject him as a friend, return his love? Can Tiên ever come out to his immigrant mom, and will he get in trouble as a gay kid at their Catholic school?

While panels in red follow Tiên’s story, panels in black, white, and indigo follow the fairy tales that Tiên reads. All concern mermaids or magic fish, and all concern girls magically tied to the sea who make their way, and fall in love, on land. One is “Cinderella,” another “The Little Mermaid,” and another still has debts to “The Juniper Tree.” The first and longest concerns a girl in a Shakespearean boy-disguise and the boy who wins her love. All involve children and grandmothers, aunts, magic helpers, and older antagonists; all speak to the ocean, and to the generation, that separates immigrants both from their culture of birth and from their more Americanized children. They also evoke the spells, the determination, and the compassion that come with the right kinds of love.

If The Magic Fish were nothing but what its first third promises—red realist childhood stories and blue fairy-fish stories—the book would end up good enough to recommend, not only for its sensitive storytelling pace, its lovely, expectant faces and tender poses, but for the way that Nguyen deploys ink and monochrome color. One particularly expressive panel where Claire comforts Tiên uses at least five intensities of red, from Claire’s dark skin to the pale-pink of Tiên’s much-mended and plot-relevant jacket. Nguyen’s line art, meanwhile, is its own pleasure: his many sinuous curves and filigree traceries bring exceptional beauty to long hair, fish fins and tails, waves, and showers of magic stars from a twilit sky, but he is also more than capable of following them with cartoony middle school kids, whether they’re credibly happy or quietly angsty or, in one case, sweaty.

And yet—for all the delights its first segments delivers—The Magic Fish is far more than that. There’s a third storyline colored in tangerine: yellow-orange panels, beginning less than halfway through the book, denote flashbacks, mostly to Vietnam and the days when Tiên’s mother and her new husband became refugees. Now that the Phong family have become US citizens, Tiên’s mother can go back to visit her family, and once there, she learns other, Vietnamese fairy tales, linked by motif to the Western versions her son has told her before. These tales, in turn, illuminate Tiên’s coming out story at home and his wish for a romantic happy ending. That wish finds support in the way that his mom, her relatives in Vietnam, and, by extension, Nguyen himself self-consciously tweak, transform, and reinvent matters of heritage so that they can inform, rather than contradict, modern, queer lives.

Nguyen keeps these optimistic, queer-positive, kid-friendly claims aloft not just through his plots, but also through deft nets of elegant symbols. Mending clothes—as Tiên’s mom does all the time—is like adapting folktales. Patches are like peaches. Adapting folktales is like translation. Translating is like baking, but also like what Claire does at school, serving as a trustworthy go-between. And all these enterprises are like the larger enterprise of fixing a life, picking yourself up after a rent or a tear or a disaster—say, a war—and learning to go on. Fantastic visions meet their counterparts in the careful realist stories that link Nguyen’s generations, that link the troubles of immigrant parents to the emotional questions tweens (and not only gay tweens) try to handle. “I feel,” Tiên tells Claire, “like everybody’s problems are so much bigger than mine.” He’s not wrong. But his problems are real. 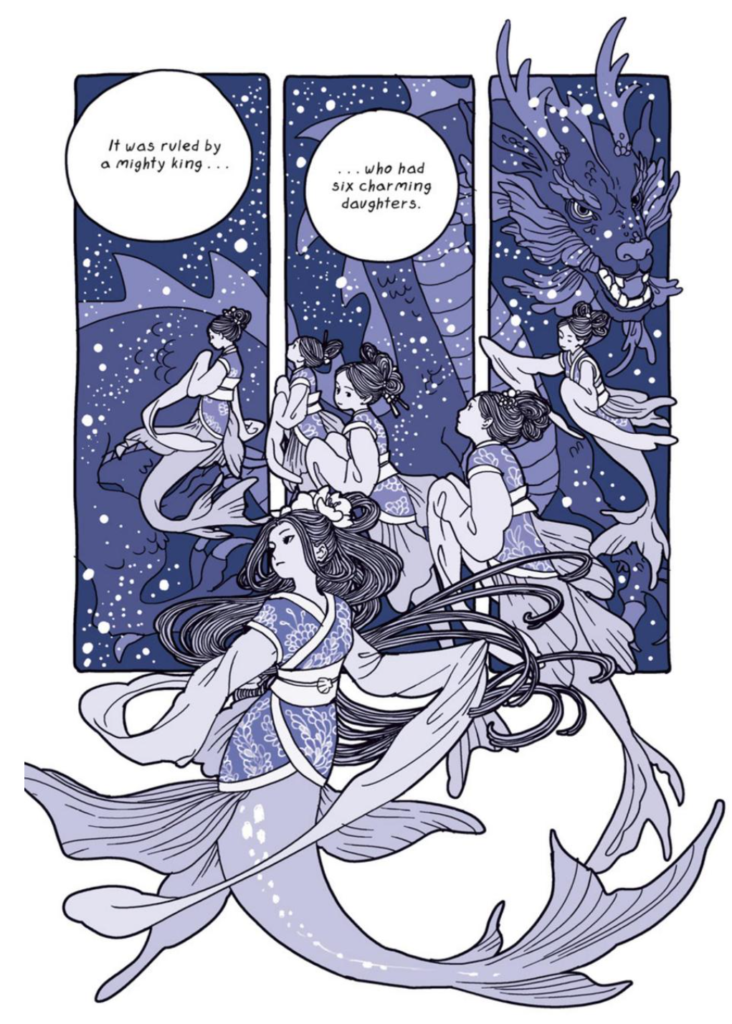 artwork from The Magic Fish by Trung Le Nguyen

As the braided tales inform one another, fairy marine princess to immigrant mom to stressed-out, crushed-out kid, the colors do too: in one of Nyugen’s signature effects, single objects and then panels on pages with one color incorporate another—first the red peaches in the blue tale of Alera, then panels of tangerine or indigo inside pages of red. Asking “How can I return to a place I’ve never been” about the fierce ocean, looking brave and vulnerable in her blanket and cloth cap, young Alera echoes Tiên’s questions about his own relationship to Vietnam. His mom’s resolution, like Alera’s Happily Ever After, proves worth the wait.

Astonishingly beautiful all on its own, Nguyen’s story will still make sense to kids who have read few or no graphic novels before. It’s likely to be the first long story with an Asian, and especially Southeast Asian, protagonist that some of those kids have perused. Comparisons to the deservedly über-popular Raina Telgemeier, to Tillie Walden, or to Jen Wang’s also-elegant The Prince and the Dressmaker might prove hard to avoid.

Comparisons to the best-known comic about insecure Asian kids—MacArthur Fellowship winner Gene Luen Yang’s American Born Chinese—show a welcome variety of difference. Graphically, panel by panel, the two are nothing alike (and, if it needs saying, China is not Southeast Asia). Structurally, they resemble each other. Nguyen’s volume, like Yang’s, brings together multiple narratives, one about a kid and one built from folktales. Yang tells an emphatic story about accepting the heritage, and the body, you’re given. The Monkey King comes all the way from legendary China so that Yang’s protagonist can stop his fits of self-hate, his futile attempts to be someone else (someone white), someone other than what he was at birth. It’s a perfectly told and deservedly famous story, but it can hit trans kids and artsy kids and kids who require assistive technology in very much the wrong way.

Nguyen hits us the right way. “It feels as though I’m not whole,” his Little Mermaid figure tells her elaborately drawn, marine-magical grandmother, who cautions the girl: “This is transgressive. Your yearning desire to be other than what you are may well be your undoing.” But, as we know and Tiên learns, that desire might instead build your best self. Your wish to dress different, to look different, to change your friends or your habits or your body or your pronouns, might be a culpable wish to run from yourself (as in Yang) but it also might be your way to become who you need to be, who nobody else knew you were. Self-acceptance can also be self-transformation, and that’s a lesson everybody—not only middle school second-gen kids—could use.

But I’m getting away from my initial claim. So let me call your attention to the striking, Art Nouveau-ish, transoceanic beauty on every page of The Magic Fish, which also tells sweet and credible stories about a girl in disguise and her peach tarts, a spectacular mentor who can’t leave the ocean, a mom and her kid and their family in Vietnam, a kid and his dad and his crush and their best friend. Ultimately, though, you have to read it yourself, because The Magic Fish is everything.