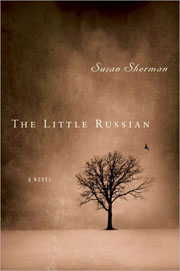 Berta, a haughty young girl employed as companion to the daughter in a prominent Moscow family, finds her services are no longer required and is sent home. To get there she must travel two days by train, from Greater Russia to Little Russia—namely the Ukraine. Gone is the size and splendour of Moscow; her birthplace is a dusty provincial town whose inhabitants converse only in Yiddish. The many versts she has travelled are nothing compared with how far she has dropped down the social ladder, her debilitating demotion from Greater Russian to Little Russian.

So begins this entrancing, meticulously researched debut from Susan Sherman. Preoccupied with Berta’s journey, from her travels within her native Ukraine to her ultimate desperate flight from it, the novel takes us back to the beginning of the last century and charts Berta’s development alongside that of her beleaguered country. Through the vicissitudes of twenty years—a short but tumultuous history—Berta must mature to survive. She sloughs off her pride when she meets and falls for Hershel, a wheat merchant. Through him she accepts her identity and her status (“They were Jews and, worse, Jews of an indeterminate origin”), but after witnessing the brutality meted out during a wave of pogroms, she is made to realize that identity and status are the key factors contributing to her people’s merciless persecution.

“Nobody likes a spy,” we are told at one point, but the more we read, the more we can exchange “spy” for “Jew.” Sherman writes wincingly well on each new outbreak of scattershot violence. “Kill the zhydy and save Russia and the czar!” a baying mob chants, at once reminding us that violence stems from fear and irrationalism. Similar hatred appears at unexpected moments in the book, manifesting itself verbally as well as physically. Snide references test Berta: when she invites a fraudulent medium to one of her soirées, the old charlatan is surprised, saying, “I have never been to a Jewish home before. I didn’t think they were so nice and clean.” (Berta does what she always does in such situations— “she kept her expression neutral and said nothing.”)

Preconceptions merge into prejudices when the Kaiser wakes “the sleeping bear” and war breaks out. Pavel, a member with Hershel of the General Jewish Workers’ League, is shopped to the police on suspicion of being a Jewish agitator. What’s more, “A Jew owned the corner store. Jews did business with the devil and some even had horns and a tail.” Just as fanciful but no less tragic is when one of Berta’s friends informs her that Jews killed her husband: “They tell the Germans where to bomb. They have a lotion, you know. The Jews I mean. They put it on and it makes them safe from the bombs.” Eventually a new, more virulent strain of anti-Semitism takes hold as rumours circulate that ninety percent of Jews are traitors “and the rest are spies.”

Life becomes tougher for Berta when she has to fend for herself. Hershel, now her husband, has been smuggling arms to the shtetls to protect them from the spate of peasant-led pogroms. After a botched operation he senses the Okhranka, the czar’s secret police, closing in on him and urges his wife to pack and flee the country. But Berta decides to stay put with their two children. As young patriotic men sign up to fight the Germans, “pledging their lives to Mother Russia” and vowing to “do their part for the Little Father,” Sherman’s Little Russian feels her world caving in on her. The bank repossesses her house in Cherkast and her Jewishness prohibits her from finding a new one, or an accompanying job. The glittering salon society she recently mixed in has dissolved, her friends too scared or unwilling to help. Just when we feel Berta’s lot can’t get any worse, Sherman ushers in the book’s magnificent though harrowing set piece, a calamitous assault on Berta’s community by hordes of marauding Cossacks. Berta is made to endure the ultimate adversity, a mother’s grief, but her will remains unshaken, and we follow her progress anxiously as she first struggles to make ends meet and later runs for her life.

Berta’s courage renders her admirable, but we also find ourselves captivated by her series of shifting transformations. Each part of the novel carries her latest incarnation as its title. Thus “The Lady from Moscow” morphs into “The Wheat Merchant’s Wife”; “The House Jew” soon has no option but to become “The Border Stealer.” Berta makes the dramatic transition from persona non grata into an undesirable who must be exterminated, and as Sherman turns her into a fugitive the reader is presented with a thrilling denouement that dextrously manages to showcase heroism intermingled with tragedy. It is refreshing, if sobering, to read of a heroine whose abrupt change in fortune is dictated by her ethnic background and not her own moral choices. Berta may not be up there with Anna Karenina, Emma Bovary, and Hedda Gabler, but her suffering is skilfully manipulated enough for us to be affected by her plight. Sherman deserves praise for also shining a light on a little-known world during one of its darkest hours, and for reminding us that 20th-century Jewish persecution did not begin with the Third Reich but was simply a continuation of history.

Unfortunately, while Sherman is wonderfully adept at spinning a tale and creating a memorable cast, she does not always excel with small but key descriptive details. Put another way, her prose is uniformly assured—no small feat for a debut—but it never goes the extra mile to evolve into the miraculous. At times she resorts to the usual clichés that hamper the first-time writer: Berta has “almond-shaped eyes”; a building is “raw-boned”; when Berta is disorientated everything seems unreal, “as if underwater.” But elsewhere Sherman impresses with descriptions that glow with originality. Berta’s voice, we hear, “sounded muffled, tremulous, like it was coming from a wax cylinder for a phonograph player.”

The Little Russian is a masterful study of one woman’s fight to stay afloat and alive in an era in which governance was consolidated with oppression and barbarism. Berta undergoes the severest baptism of fire followed by one hardship after another, and throughout Sherman possesses unwavering authorial control, making the hurt and the trauma believable and never diluting pathos into crass sentimentalism. We are swept along with Berta and her changing fortunes and end up rooting for her in the closing chapters. Sherman keeps us guessing as to whether her heroine can make it over the border to be reunited with her given-up-for-lost Hershel, and we devour the last pages greedily.