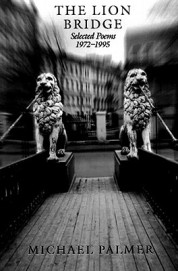 Every volume of selected poems contains the possibility for both elation and disappointment. On the one hand, it is an excellent way to restore writing to public functio—especially since a good chunk of said writing is likely to be out of print. On the other hand, it will inevitably exclude some worthwhile poems, reducing the poet's wider ambition to an anthology of "greatest hits." Poets whose work tends to be either epic or serial are especially at risk of having their larger projects fragmented into portions which cannot possibly convey the same experience as the whole. It is a paradox. Michael Palmer, fortunately, is a poet familiar with the mechanics of paradox, and he has attempted to bring to his new book of selected poems, The Lion Bridge, the same sense of integrity that make his individual volumes such pure pleasures.

For the most part, he succeeds. At 260 pages, The Lion Bridge offers selections from Palmer's first three books (Blake's Newton, The Circular Gates, and Without Music, all originally issued on Black Sparrow Press) as well as the three books from the '80s that solidified his reputation (Notes for Echo Lake, First Figure, and Sun, all from North Point Press). It also includes a generous swath from Palmer's previous book on New Directions, At Passages. One reason that this book feels so cohesive is that Palmer's body of work simply does not contain any "greatest hits"; he has forsworn such moments for a continuous perception of the world that is based on the model of language. This position is clear from the beginning, but gains force once Wittgenstein is claimed as a patron saint in a section from The Circular Gates named after his famous "Brown Book." Palmer's use of writing as image deepens in subsequent books, as phrases such as "the letters of the words of our legs and arms" or "You mean that's your idea of desire, with all those commas?" proliferate.

The prominence of this stance in Palmer's work has led him to be classified as a Language poet; if he is one, The Lion Bridge shows just how expansive this seemingly insular school really is. While certainly disjunctive, non-narrative, and philosophically analytic, Palmer's work is also sensual and even surreal. The poem "Without Music," for example, eventually incorporates an interrogation of language-created reality ("times labor's loss not mine / based upon the loss itself, 'not mine'"), but look at how it begins:

The radical sensuality of such lines is not the exception but the rule. The calm and classical elegance that characterizes Palmer's voice suggests connections to non-Language poets such as Robert Hass, and there's a distinct presence in his poems that is often highly personal (most evident in poems either addressed to or about his daughter) and political ("Seven Poems within a Matrix for War"). Furthermore, Palmer's collaborations with the Margaret Jenkins Dance Company, for whom he literally scored text for body movement, emphasize the importance of an expressive muscular musicality in his work. For all these reasons, Palmer is not so much a philosopher in his poetry as a physical scientist, whose subject is words but whose tools are also words, leading to delightful experimentation.

One aspect of this experimentation is Palmer's increasingly dominant serial mode, which as mentioned earlier can create problems of excerption. Yet Palmer has managed to offer large enough chunks of his serial work that their method and grace show through, as in the splendid "Baudelaire Series." Notes for Echo Lake, a delicate fugue of a book, is also successfully represented, with several of the sections that constitute the title poem recurring so as to demonstrate at least some of the book's lacework. (And several of these, it should be mentioned, are written in a luminous prose poetry that both defies and rewrites its French model.) Palmer even presents two sequences in full—both of these, however, from At Passages. Beautiful as these poems are, this might have been a more useful volume had it left this recent book out altogether and been envisioned as a companion to it instead, thus enabling it to select more work from the out-of-print titles. But no matter. The Lion Bridge celebrates Palmer as a poet for whom no language, no discourse, no measure, no mythology is out of reach. For that it is worth crossing.