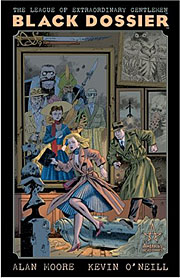 Alan Moore has been widely touted for bringing the depth of a literary novel to his comics. In The League of Extraordinary Gentlemen, he turns the tables, blending all of literature into a comics-style crossover event to dwarf anything dreamt of in the marketing departments of mainstream comics publishers. Captain Nemo! James Bond! Don Quixote! Gulliver! And many, many, many more. In Black Dossier, Moore and artist Kevin O’Neill return to characters whose adventures they chronicled in two previous graphic novels, but they also expand their vision to encompass the whole history of this world and the doings of the extraordinary individuals in it.

Black Dossier’s frame story has Mina Harker and Allan Quartermain of the Victorian-era league stealing a copy of the British government’s file on the group’s activities through its many incarnations. The contents of this dossier are intercut with Mina and Allan’s traveling through 1950s Britain, pursued by their former employers. While the framing story is perhaps a bit basic, it gives us closure on the Harker/Quartermain relationship that was only just beginning when we last saw them.

The inset pieces, however, are the book’s real appeal, even if they’re just short tastes that leave us wanting more. They give Moore free rein to impersonate William Shakespeare, P. G. Wodehouse, and Jack Kerouac, and to write in the simplified official vocabulary of Orwell’s 1984—all of which he pulls off with his usual aplomb. And although many of the insets are prose pieces, O’Neill gets to try the styles of comics from the 1940s and 1790s, “Tijuana Bible”-inflected pornography, and a 3-D phantasmagoria (the glasses are included on the volume’s back flap).

In prose stories included in the original issues of the League comic, Moore began to show the vast reach of his syncretic project. Black Dossier continues in a similar vein, although thankfully it’s far less dense. Still, for any reader who’s less of a polymath than Moore himself—i.e., just about all of us—this means that for every moment of recognition (“Hey, that’s George Smiley from the John LeCarre books!”) there’s bound to be a moment of incomprehension (“Who the heck is that odd blackface character with the flying ship and the Dutch-speaking puppet women?”).