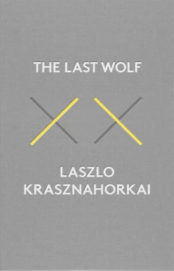 Winner of the 2015 Man Booker International Prize, László Krasznahorkai has a reputation, perhaps not unearned, of being a notoriously difficult writer. His fiction is filled with winding, obsessive passages that blatantly disregard the “artificial” full stop, as he says—instead preferring commas, parenthetical asides, and a prose that reflects the more natural stream of speech. Krasznahorkai’s fiction is dense, too—the Hungarian author has a proclivity for shifting points of view (sometimes even within the same sentence), unorthodox structures, and narratives that teeter on the edge of apocalypse. One of his translators, George Szirtes, says that Krasznahorkai’s sentences take the reader down a “slow, lava flow of narrative” and through “loops and dark alleyways—like wandering in and out of cellars.” Unapologetically bleak, his work can be a challenge to read—but it is also among the most inventive and rewarding fiction out there today.

For the uninitiated, diving into Krasznahorkai’s work can be an intimidating experience. As beautiful and sweeping as masterworks such as Satantango and The Melancholy of Resistance are, they aren’t the easiest gateway into Krasznahorkai’s world. Luckily, the Hungarian’s newest two novellas, The Last Wolf and Herman—published together in one slim gray hardcover—stand as a perfect introduction to Krasznahorkai’s growing oeuvre. A welcome addition for the curious reader and the Krasznahorkai enthusiast alike, these novellas display all of the characteristic traits that make reading Krasznahorkai such a unique experience. 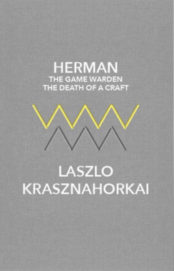 Translated by George Szirtes and John Bakti respectively, The Last Wolf and Herman stand on their own as two separate narratives, though they’re thematically connected with typical Krasznahorkai concerns—alienation, poverty, and despair. Herman—a two-part story told from two different perspectives—is the shorter and easier to digest of the two. In it, we witness Herman, a wildlife trapper who, on the verge of retirement, is tasked with one last project: to rid the Remete woods of “noxious predators.” As Herman dutifully clears the “couple of hundred acres” of these harmful predators, he’s overcome with a sense of compassion for the animals he’s devoted his life to trapping, and descends into a state of grief and madness. As his sense of obligation to rectify a lifetime of ignorance grows stronger, an epiphany emerges:

by the time winter arrived, and Christmas came, he finally understood that he had been living his life in the deepest ignorance, allowing himself to be led by the nose, firmly believing he was obeying the order of divine providence when he had divided the world into noxious and beneficial, while in reality both categories originated in the same heinous ruthlessness . . .

Herman soon turns against the townspeople, and his growing misanthropy and highly skilled trapping skills propel the narrative into those dark, winding alleyways mentioned above, where Krasznahorkai offers no shortage of reproach for humanity.

As perfectly grim as Herman is, The Last Wolf stands out as the real masterpiece here. In a single, novella-length sentence, Krasznahorkai’s control of language and storytelling is on full display. The narrator recounts the story of his fateful trip to Extremadura, an isolated stretch of Spain, to write about the true story of the region’s last wolf. Sent (perhaps mistakenly) by an unknown foundation, the obsessed and depressed former professor tells his story to an inattentive bartender in a dingy, empty bar—a fitting locality for a Krasznahorkai narrative to take place.

Not so dissimilar from Thomas Bernhard’s infamously cantankerous narrators, Krasznahorkai’s speaker rants and rages against the world through repetitious, looping, and obsessive thoughts—a stream of nihilism off the rails:

how could he explain how long ago he had given up the idea of thought, the point at which he first understood the way things were and knew that any sense we had of existence was merely a reminder of the incomprehensible futility of existence, a futility that would repeat itself ad infinitum, to the end of time and that, no, it wasn’t a matter of chance and its extraordinary, inexhaustible, triumphant, unconquerable power working to bring matters to birth or annihilation, but rather the matter of a shadowy demonic purpose, something embedded deep in the heart of things, in the texture of the relationship between things, the stench of whose purpose filled every atom, that it was a curse, a form of damnation, that the world was the product of scorn . . .

This is Krasznahorkai verging on the apocalyptic, taking the reader into those dark alleyways, where, with an almost poetic absurdity, he explores the depths of despair. Still, believe it or not, there’s a subdued warmth in this story—this isn’t Nietzsche or Cioran or even Bernhard—and Krasznahorkai does affect a subtle pathos that draws the reader in. As the narrator of The Last Wolf gets closer to finding out the truth behind the disappearance of the last wolf of Extremadura, Krasznahorkai’s long, winding sentence accelerates to a startling crescendo.

It’s a testament to Krasznahorkai’s storytelling ability that he’s able to relay this so effectively in one single sentence. This isn’t language draped in adornment for adornment’s sake—there is pulse and purpose behind his relentless prose. Krasznahorkai creates a breathlessness that, once the reader comes to the first full stop of the novella, will make her want to pause, take a breath, and start all over again.

As bleak and unsentimental as Krasznahorkai’s fiction can be, there is compassion and empathy fueling these stories, even if it may be directed more towards animals than humans. The Last Wolf and Herman encompass all of what makes Krasznahorkai a fascinating and bewildering writer—in these stories, he again reminds us why we must grapple with the thorny questions of existence.