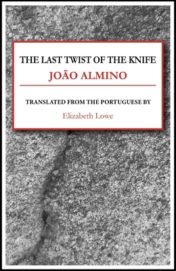 In this 2017 novel, translated by Elizabeth Lowe into English as The Last Twist of the Knife, Brazilian writer João Almino establishes a series of difficult hurdles for himself, almost as if purposely creating nearly impossible, Oulipo-like challenges. The form of the work is a journal kept by a 70-some-year-old narrator whose memory is slowly slipping away and who suddenly decides to leave his wife Clarice and—despite the warnings of writers such as Thomas Wolfe—attempt to “go home” again, to the Brazilian backlands of the northwestern plateau where he grew up.

Our hero, who perceives himself as a kind of agèd Don Juan, imagines that he still might fit back into a community where he and his family were always perceived as outsiders. He purchases his old family homestead near the isolated town of Fortaleza through his childhood girlfriend Patrícia, the daughter of the formerly wealthy landowner of the region and the man who is also, somewhat inexplicably, our narrator’s “godfather.” How he might imagine the two could reignite his one-sided childhood passion after all these years of absence is never explained. Even on the airplane on his way back to this world, our “hero” flirts with the passenger seated next to him and religiously takes her number as if she might be an attainable conquest. We realize almost immediately that our narrator has lost all sense of himself in time and space.

In many respects it is appropriate that the narrator is returning home, for, as Almino reveals, the character himself is regressing to the mental capabilities of a child. Although he recalls some incidents in full, most of his narrative is abstractly presented, the story consisting of names and vague events. Moreover, in his fragmented journal entries he often forgets what he has previously written and gives highly contradictory accounts, leaving the reader with a strong sense of skepticism and even distrust. He is the very definition of an unreliable narrator.

As these scattered entries over a brief period build up, the reader begins to perceive truths which the narrator has not yet unraveled, taking even some of the energy away from what would otherwise be a kind of slow detective tale. The narrative, accordingly, is filled with repetitions, gaps of information, clues that are rather obvious to us but seemingly incomprehensible to the narrator, and very little of the rich detail that so enlivened the great South American fictions of the 1960s and ’70s. A typical passage reads like this one from May 22:

Arnaldo lives on a little ranch very close to the one I bought; I can’t remember if I already mentioned this. It’s been years since I last saw him, but now we frequently communicate on WhatsApp. I still think of him as my childhood friend, a better companion than Miguel, Clarice’s brother, because he used to go everywhere with me, and I was always ready to tag along when he did his farm chores or when he went hunting for tiús and preás.

In short, on the surface the narrative actually says little since the narrator cannot make sense of his own experiences; yet given the clues he strews throughout his confused memories, we learn a very great deal. We ourselves are accordingly required to fill in the details with a far richer narrative that the fictional author himself might be able to provide. By the time our not-so-very-bright storyteller finally understands that the past “does not substitute for the present, the inherent difficulties of the unknown or the uncertain promises of the future,” the poor hero has no present and very little future left.