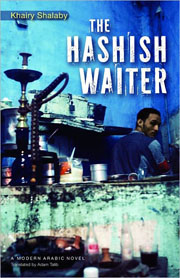 The Hashish Waiter is the seventieth book by Khairy Shalaby, the 2003 winner of the Naguib Mahfouz Medal for Literature who passed away this past September. The subject this time is a dime bag’s worth of the “eighty percent of the male population” of Cairo who, according to Shalaby’s narrator, smoke hash—or did in the early 1970s, when the novel is set. (Yes, I know my metaphor doesn’t quite work, but that’s because the frothing dragon in the corner is distracting me.) Hashish is, of course, illegal in Egypt, but this proves at most a modest inconvenience to the narrator and his “own little support group,” gathered in Hakeem’s hash den in a rundown neighborhood “at risk of collapse.” Nor are these Cairene stoners the usual suspects. Rather, the group is comprised of young “writers, poets, artists, journalists, and a few university students” who have come to know each other over shared water pipes and mutual interests and concerns. They constitute a salon of sorts, and each member has a story—from Zaki, “the hardworking, up-and-coming actor,” to passionate Marxist femme fatale Hayat al-Barri, from Faruq, political caricaturist for “a famous weekly,” to the disappointing Wagih Farhan, who disappears only to turn up again, to everyone’s disgust, as a reporter for Israeli radio.

As bowls are smoked and tea poured, the group sifts through each other’s latest adventures. Days turn into years as though the only thing the world has more of than hash is time to squander. Careers slowly blossom or abruptly wilt. Strutting fops suddenly don’t give a damn how they look, and talk of the Beatles gives way to gossip about Saddam Hussein. The narrator sells a few stories; someone else lands a job with a magazine. Friends of friends drop by and are eyed with suspicion. Marriages fray; a den regular goes missing; someone scores and someone else gets burned. All the while, over these ambitious (albeit often wasted) careerists hangs the knowledge that “the literary and artistic institutions in the country . . . were all the property of the government.” Indeed, politics is the perennial buzzkill at Hakeem’s. The friends of friends are suspect because “the whole intellectual community—according to firm, reliable rumors—was a nest of spies,” and with Anwar Sadat’s infitah just around the corner, even the momentary high of the 1973 October War soon gives way to cynicism over skyrocketing prices and empty store shelves.

Life may remain “tolerable” for the habitués of Hakeem’s, but the world beyond their “cherished, magical, sleepless” home away from home is growing increasingly “rowdy,” to employ a term straight from the “hash-den dictionary”: “the rowdy Americans” are “planning to invade and occupy Egypt”; the local Marxists all want to “get in on the rowdiness” but might be disappointed “because the rowdy Soviet Union itself had gone from trading in the pains and dreams of the world’s poor and oppressed to trading in human destiny in an insane nuclear arms race that didn’t give a damn about the future of the working class . . .” Families are roiling, each with at least one son in uniform, thanks to Egypt’s Israel-obsessed rowdiness, and the Egyptian pound has staggered and fallen, becoming “the laughing stock of world currencies . . .”

Enter the waiter of Shalaby’s title—Salih Abd al-Birr Mahran—who works cleaning and filling hash bowls for Hakeem. He is known to the den’s clientele as Rowdy Salih because he regularly goes off, acquires some denatured alcohol and a Coca-Cola, and proceeds to get, well, rowdy. “Everything he did and said made us laugh,” the narrator confides, early in the novel, “because we thought it was a slice of utter insanity.” Rowdy, however, soon becomes a folk hero, a beat bodhisattva, for the narrator and his circle. As all acknowledge, there is “something of Rowdy Salih” in each of them. Or so they wish, for Rowdy is less mirror than moral lesson, “damning evidence that a human being was his character, not his clothing, and that people who thought differently were—in his opinion—idiots, duped by the scams of a frivolous society.”

Having trained himself “not to desire anything at all,” Rowdy Salih is an exemplar of dispossession—or, as he puts it, “the king of the run-down ’cause I’m run-down in every which way.” As he negotiates the narrow spaces in which he is permitted to exist, he offers the den’s Rowdy wannabes both a reminder of how paltry their own roistering is and a lesson on what happens when a garden-variety tough crosses the powers-that-be. For the narrator and his friends, Rowdy—like some Middle Eastern Neal Cassady or Herbert Huncke—models a way of holding on to one’s dignity in defeat while refusing to sell out. It is a lesson not limited to Sadat’s Cairo.

The Hashish Waiter is perhaps less a novel than portrait of a generation in crisis. However, if, as Henry James believed, “character in any sense that we can get at it is action, and action is plot,” then The Hashish Waiter has action and plot aplenty. It is also a fascinating visit to a world about which the Michelin Green Guide has been sadly silent.