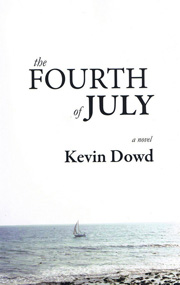 It only takes a minor event—that one extra drink, a nosy neighbor rapping on the front door, an alienated spouse’s unexpected entrance—to spark the collapse of a relaxing summer escape. Such is the existence of Jack Smith, the troubled lead in Kevin Dowd’s comedic debut, The Fourth of July. The year is 1974, and Jack, recently separated from his wife, arrives on a small island off the coast of Connecticut with his two sons. He’s looking to kick back and play the field, but trouble lurks: raccoons have taken over the trash bins, a clingy childhood flame won’t leave him alone, and the local teenage tart seems to think he’s the cat’s pajamas. Before long, a series of misunderstandings and bad decisions transforms Jack into the embarrassment of the community, public enemy number one. What little serenity existed in his home and mind evaporates in a blink. And, come Independence Day, his family’s vacation home is nothing but charred rubble.

The whole affair is as silly as it sounds, and Dowd’s flair for the ridiculous helps The Fourth of July zip along at near-lightning swiftness. The novel is buoyant and breezily digestible, constructed through the eyes of multiple first- and third-person narrators. And though this tactic frequently works in the novel’s favor, certain choices of speaker—in particular that of local sailor Cap’n Bob late in the book—arbitrarily separate the audience from Jack and his gang. Also, the rapid pace of the storytelling leads to characters with modest appreciable history and thwarts personalities from fully forming. Jack’s wife, Martha, may be equal parts harpy, cruel, demanding, and lustful, but each trait finds employment in individual parcels, never overlapping in a complex manner. The same can be said for most of the female cast, who are rarely seen as anything more than a nuisance, habitually resorting to clichéd behavior.

Perhaps, though, Dowd’s swiftness and stereotypical characterization is intentional, for withinThe Fourth of July is material reminiscent of classic, Hollywood black-and-white screwball comedies. In this island world, mix-ups are common, as are double-crosses and characters cracking jokes for little reason. For example, when an undertaker’s mother talks to him about the perfect woman, she asks, “Why can’t you find someone like that nice Polish girl that came to your office last week?” “Mom, she was dead,” he replies. “She wasn’t always dead,” the mother retorts. Throughout, the novel evokes a time when the motion picture industry pumped out stories meant to make the audience laugh, when characters existed as much for a punch line as for a story. And maybe this is Dowd’s ultimate goal, for even as the language of the novel’s younger characters reminds the reader that the setting is the “Me” Decade, what with the sporadic utterances of “far out” and “jiving,” quite often, the eccentric circumstances surrounding these phrases make the earlier era hard to shake. And that’s what makes The Fourth of Julyenjoyable: the constant feeling that we’re experiencing a long lost Saturday afternoon matinee designed to provide a few laughs and a couple hours of zany diversion.