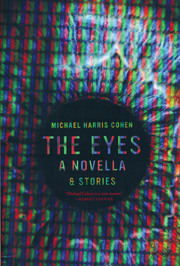 The mission statement of Mixer Publishing states that their goal is to “break down the arbitrary boundaries between genre fiction and ‘literature,’” as well as to “seek a playful middle ground between entertainment and art.” If their first book, Michael Harris Cohen’s The Eyes: A Novella & Stories, is any indication of what’s to come, Mixer Publishing is well on its way to successfully reinventing what we think of as “literary.”

The highly stylized noir story “Fingered” opens like a defibrillator to the chest, shocking the reader to attention:

A cross between Burgess’s A Clockwork Orange and Gibson’s Neuromancer, the prose is high-octane, a fitting vehicle for the mangled characters about to drive straight into a wall of their own violent creation. Take the narrator of “Fingered,” a not-so-innocent anarchist planning a bank job as a “performance” to call attention to the evils of capitalism. The only problem is the gun has a hair trigger, and that trigger changes the narrator’s life in an instant. “World’s got all kinds of cages. We just happen to be in the one place, out-side a zoo, where one can see the bars.” The story shifts back and forth in time with a dizzying speed that adds to the growing sense of unease, revealing the ways in which we are trapped by our own darkest desires.

“The Life and Death of John Doe” follows a drug dealer named Bell whose job is to procure dead bodies in which a new kind of psychedelic mushroom is grown. The story races forward with the frenetic speed of the cranked-up characters who inhabit it, until the climactic scene where the narrator gets locked inside one of the drawers in a morgue that contains a dead body:

And my goof fades. Meth will take you like that. Everything is amped up and your thoughts will get you two steps ahead of your feet . . . And I am fucking in the shit. The sound of my own tiny giggle scares me. So fucking tight and black. I want to move, but I’m afraid to make noise and even more afraid I’m gonna freak my shit when I realize I can’t move because there’s not enough room anyway . . . I can’t turn over, I can’t even turn my head without banging into hers and I don’t want that.

The scene is a masterpiece of suspense. We turn the pages as we do with all great noir, because we have to. We feel ourselves in the claustrophobic coffin along with Bell, but Cohen doesn’t simply want to make us uncomfortable and that’s where his genius lies because the story also has literary chops. Bell’s time in the drawer with the corpse changes him, not in the simplistic and heavy-handed way of so many literary epiphanies nowadays but in a manner so subtle we hardly know it’s there. In the final exchange between Bell and his boss, we understand the ways in which our narrator is already dead, a colder corpse than the body with whom he was trapped:

Will it kill me? I ask. My voice soft like a child’s.
Only the part that fears dying. Death is the veil which those who live call life, Bell.
They sleep and it is lifted.
I toast Damos, and I put the cup to my lips, and I drink.