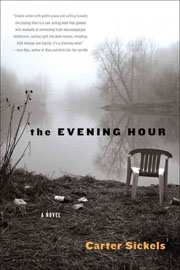 Ecological depletion, drug use, rural depopulation, and disillusioned youth in an age of shifting social norms and environmental instability: in his insightful debut novel, The Evening Hour, Portland writer Carter Sickels imposes these timely troubles on the inhabitants of Dove Creek, a mining town in West Virginia. In doing so, he explores questions of morality, manifest destiny, and ecological peril to some harrowing yet ultimately predictable conclusions.

The novel follows Cole Freeman, a twenty-seven year old nursing home aide, petty thief, and drug dealer, as he tangles mutedly with a charmingly varied, but often shallowly developed, cast of characters: Cole’s religious fundamentalist grandparents suffer poor health, his drug-addicted and ex-convict friends stir up trouble between relapse and reform, and his long-absent mother makes a stunning reappearance. Cole himself earns an easy and unethical living stealing valuables and prescription drugs from the elderly folks who rely on him. He resents his small-town life, but seems bound to it by equal parts inertia and fear. All roads to success lead out of Dove Creek.

The town’s stagnant atmosphere ignites with moral conviction when the novel’s primary villain, the industrial corporation Heritage Coal, razes the mountains overshadowing Cole’s hometown, threatening pollution, destruction, and general unrest. Frequent blasting and the resultant rock-showers fissure homes and set nerves on edge. A broadening network of elderly and addicted people in Cole’s conflicted care parallels the looming danger of literally unstable ground. The threat of drilling and dynamite, and of the town’s insidious social ills, eventually forces its inhabitants to stand up for the integrity of their endangered way of life.

Whispers of redemption occasionally temper the novel’s monumental overarching themes—decay, helplessness, and misspent time—but these lighter tones ultimately fade against the harshness of the setting and the strength of Sickels’s realism. An environmental tragedy in the book’s final third sets the stage for sacrifice and heroism. However, Cole’s small actions get overshadowed by an immense imperiled landscape and its physical markers of decline. Because The Evening Hour piles so much of what darkens the evening news on the head of one character, the novel feels heavy, difficult to wade through, and sometimes unfocused. Readers may grow weary of Cole’s mix of quiet nihilism and selfishness, and of the dingy grays with which Sickels paints Dove Creek. The novel offers no quick fixes for the many cracks in Cole’s insular world.

Despite its dreary tone, The Evening Hour is worthwhile for a number of reasons: Cole’s dying town on the brink rings harrowingly true, and Sickels’s prose twists around the darkest corners of rural American experiences, mitigating some of the more unpalatable plot points. Perhaps readers will see through Dove Creek’s murky twilight and find themselves engaged with the real-life threats that Sickels has so convincingly woven into the fabric of Cole’s experience.