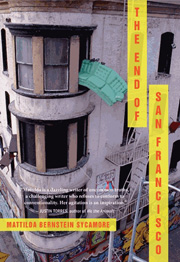 Mattilda Bernstein Sycamore has a model for relationships that says: “First you reveal everything, and then when you can’t think of anything else to reveal you go deeper.” In The End of San Francisco, Sycamore lets the reader feel the bitter sweetness of that relationship model, the “push-pull of intimacy” that makes the process of excavating memories so painful but so cathartic, so difficult but so urgent.

A visit to her father’s deathbed to confront him about sexually abusing her as a child is the first stop Sycamore makes on this non-linear memoir. The rest of the journey is not any less emotionally piercing. We are there when she loses her friend JoAnne to a heroin overdose (or perhaps to a hospital that refuses her health care), when she starts turning tricks in San Francisco, and as she confronts the racism and transphobia that permeates even the most progressive groups in New York and Boston and perhaps everywhere.

The centrality of activism in Sycamore’s life makes this memoir a vivid description of the unbreakable link between personal experiences and political issues. Her model for relationships could be adapted to say: “First you rebel against everything, and then when you can’t think of anything else to rebel against, you go deeper.” And how not to rebel against police brutality, institutionalized violence, and the corporate agendas of the gay mainstream when their effects are constantly present in your life and the lives of those around you.

Some may see in Sycamore’s relentless criticism of everything from consumerism and gentrification to hipsters and “scenesters” a somewhat stereotypical attitude among radical circles. However, her years of experience as an organizer and the deep reflection, empathy, and introspection she demonstrates help her create a clear, intelligent, and human portrait of this position and of a scene that might be foreign to some readers. For those who are already familiar with queer movements and ideas, The End of San Francisco will be interesting as well for the insider details it includes on emblems of radical engagement in the ’90s, such as Gay Shame, ACT UP, The Mission, and Dumba.

But Sycamore’s relationship model could also be modified to add: “First you revel in everything, and then when you can’t think of anything else to revel in you go deeper,” because we also stay up all night with her at Together, that first gay club, dancing “for the echo, for the cement, for the other balconies, probably not for the ocean as much because by the time we remembered the ocean we were just dancing” and then staring into Derek’s eyes still on her “in a way that means I’m here, we’re here, we’re here together.”

This book might be about the end of San Francisco “as a place where marginalized queers could try to figure out a way to cope,” but after reading it one thinks that perhaps there was never a beginning to this place. Perhaps we still have to figure out ways to cope, reveal, rebel, revel, and be together.