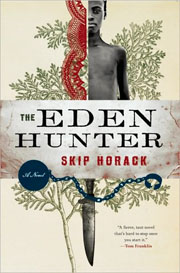 Reading a novel whose protagonist is a pygmy tribesman captured and sold into slavery (and whose canines and incisors have been filed into sharp points), you might become too conscious of the hero’s “otherness.” But this is not the case in Skip Horack’s first novel, The Eden Hunter. Horack, a former Stegner fellow and the recipient of the 2009 Bakeless Prize for his short story collection The Southern Cross, has here written a novel that is an effective mixture of the empathetic tradition and the best work of Cormac McCarthy.

Much of The Eden Hunter focuses on Kau’s life five years after being sold into slavery, when he flees into the Spanish Florida wilderness. His seemingly impossible quest is to find someplace like Africa: “That morning there had been a strong south wind and he had smelled salt air. How to say it? How to say that he somehow needed to see open waters?” From this excerpt, we can perhaps guess Kau’s ultimate destination, but his passage through a subtropical frontier of pinelands and lowlands littered with misfits and murderers is as compelling as the suspense surrounding his journey:

He was lying on his stomach in a purple field of blooming meadow-rue, his face buried in the folds of the saddlebags so as to block out the midday sun, when he heard the low buzzing of a honeybee. For a moment he wondered if all his pining for his home had finally confused his mind. He turned his head and opened his swollen eyes. The bee was hovering close, and he reached for it as if somehow hoping to prove the reality of the thing.

Kau is in pursuit of another life, but it is in his nature to reflect on the landscape’s natural beauty: “Kau lingered in camp until they were gone. A breeze came and the river cane swayed all around. He heard water frogs in the distance and could smell the river. It felt good to be alone and so he lingered still.” That Kau ultimately discovers the hidden resources of forest, lowland, river, and island speaks to his inner strength and steadiness, as well as his skill as a survivor. In his search for a place to call his own, he takes advantage of the raw materials life offers him: “a small knob of oak lying loose near a woodpile” that he fashions into a drawknife of sorts, a rowboat hidden in palmettos growing along a river bank, and a honeybee colony whose hive he considers “like a lost and frantic captain chasing seabirds across open water, all the while praying for land.”

What ultimately separates Horack’s The Eden Hunter from most other contemporary southern novels is its vision of humanity. Though violent, there is a dogged sweetness always limping behind the torture and the killing, moving slowly on its way across the Apalachicola River, drifting south toward the Gulf of Mexico, and finally seizing on the image of a man dancing in his solitary way “for the attention of some heathen god.”