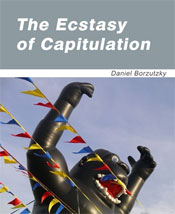 At first, Daniel Borzutzky’s The Ecstasy of Capitulation seems like another small book from another small press, and initially the collection doesn’t defy expectations of boredom: “Noun Clause” was a snooze. “Present Progressive” didn’t progress. “Simple Present” was simply forgettable:

And so on. But then there are poems like “The Hippo-Lexicographer Affair,” which lampoons the Iran-Contra affair and satirizes the rhetoric of politicians.

I did not trade our soybeans for hair pieces, nor
did I trade our confessional poets for Persian
ornithologists.  I have issued a directive
prohibiting the undertaking of covert
ornithology.

Or the equally satirical excerpt from “Henry Kissinger's Acceptance Speech for the 1973 Nobel Peace Prize”:

The pace continues to pick up with Kafkaesque pieces such as “Exile,” the reading of which is something like walking a downtown street, catching a glimpse of yourself in a plate-glass window, and suddenly realizing you are naked and all the clothes shops are closed for some unannounced holiday.

Borzutzky has a gift for juxtaposing incongruous elements and for taking unexpected turns, an ability to transubstantiate the mundane into the weird. His words are apt to invade your language, use it as a springboard to get into your cognitive processes, and make you rethink what you thought utterly unobjectionable—perhaps best exemplified by these lines from “Urban Affairs”:

We approve of intersections but are opposed to streets in general.
Alleyways and dead ends should be paved over with mountains.
Potholes should be filled with violets, or ideas.

Intensely aware that writing is not holy, authors are not divine, and literature has much in common with the newspaper lining the litter box, Borzutzky is enamored of the Barbaric Writers—the brainchild of Chilean author Roberto Bolaños—who interact with the works of literary masters by defacing them in the crudest ways imaginable. Borzutzky pays homage to the group with his own deadpan fantasy:

When I watched the Barbaric Writers defecate on my
manuscript, I felt a great sense of relief, a great sense of
fraternity with these men who loved literature enough to
destroy it, and I recalled a poem I had once written, but
never had the confidence to publish, about a so-called
poet who shat himself into a toilet, only to float on his
back as torrential downpours of poetry filled the bowl and drowned
him.

Whether Borzutzky is satirizing politicians or social conventions, the language of sex or of popular magazines, or our innumerable failed relationships (intimate, familial, or otherwise), there is a manic energy that is cannily channeled into his verse and a quirky sense of humor that often leaves the reader chortling to himself like a patient in a psych ward. The word choices are deft, the language precise and, perhaps taking their cue from the Barbaric Writers, these poems never take themselves too seriously:

For who is to say that the air we breathe
is anything more than a secret code both
capricious in structure and marketable in
the substance of its sad and tender humility?

I leave you to puzzle out the answer to that one for yourself.