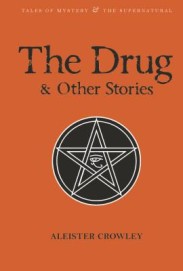 In this posthumous collection of stories by Aleister Crowley (1875-1947), we see evidence of the Great Beast’s comparative religious and occult knowledge, though too often this is hauled into service for the churning out of tepid pulp pieces. Dust off some Vedanta, plug in the cult of Apollo or a ouija board or the ceremonial conjuration of an angel, add a drop of “the Primal Water of Chaos” alongside a chunky paragraph rehashing appropriately watered-down Kabbalah, insert a murderous dwarf or hunchback or a team featuring one of each, and abracadabra: “Now therefore his disciples came unto the Vault of that Mystic Mountain, and with the Keys they opened the Portal and came to him and woke him.” So let it be written, so let the writer get paid.

Crowley claimed, as prophet of the new religion of Thelema, that his Book of the Law was channeled via automatic writing, the real author being a nonhuman entity. This book, regrettably, reads as if the spirit of Hack took possession of Crowley’s hands and spun off assorted tales of mystery, ornate allegories, and gassy philosophical dialogues.

Not that there aren’t interesting relics hidden in the muck. In “A Death Bed Repentance” Crowley revisits the Plymouth Brethren sect, his oppressive childhood religion, stripping bare their fallacies and using their central, stubborn theological insistence in an omnipotent and just deity to reveal how little that movement cared about the narrative contents of their holy scriptures. This is most interesting as a think-piece, as a revealing glimpse into Crowley’s biography and mind. The same is true of “Felo de Se,” which walks through Thelemic thoughts on suicide (and allows Crowley some punching practice with his nemesis, Christianity, like the jab about that faith being predicated on “the most deliberate suicide possible, since he had planned it from all eternity, even taking the trouble to create a universe of infinite agony in order to redeem it by this suicide.”

Indeed, the best parts of The Drug offer traces of the bombast and wit so evident in Crowley’s other works, though these seem, at best, rough versions of what one would expect from the author of such inspired works of fiction as Moonchild and Diary of a Drug Fiend. There are pleasant one-liners (Sufi poetry may engage the erotic for spiritual reasons “but also, I believe . . . because [the Sufi writer] is just as dirty-minded a beast as you and I” and some clever ideas (those willing “to become the saviours of their country shall be called the Synagogue of Satan, so as to keep themselves from the friendship of the fools—who mistake names for things”), but for the most part these pages are given over to cheap melodrama, to nymphs, and divine gardens, narrators that introduce themselves as “the Key of Delights,” plots exploring “the death-struggle against Nature, to which there is only one end,” and the rumbling of ancient things into abysses as the gods stride by or howl or are suspiciously unresponsive to human entreaties. When Crowley writes that “Of course, no more than one seventh of the wisdom is ever confided to any one of the Seven, and the Seven meet in council but once in every thirty-three years,” the only math that makes sense is the author calculating his payment by the word.

This dialed-in quality can, at times, allow Crowley to play to his strengths. He knows a great deal about classical pantheons east and west, and he can effortlessly bring those deities to life, squabbling and prancing across his pages. In one successful light moment the Buddha is given “Well, so long, old chap” as a line of dialogue. Such moments bring to mind Crowley’s smugly tongue-in-cheek Simon Iff Stories, all exponentially superior to the offerings on hand here. Indeed, the light, snide, characteristically arrogant tone Crowley does so well is here too often discarded for prose that oscillates between “deep-throated mockery of the gods” and a shrieking, crucifix-shattering pitch of horror.

Horror is a real problem here. “The Testament of Magdalen Blair” is famously scary, though it would be a sight more frightening if it didn’t belabor “the essence of horror” in such leaden language—just give us a creepy hint of the scene, please, and spare us lines like “And then there came the cold-drawn horror of stark blasphemy against this God—who would not answer.” Horror hurts this collection, too, by making comparison inevitable: Crowley is no Lovecraft in these pages, nor is he Poe. If, as a reader, you’re interested in a gripping story, told via the text of a personal journal abandoned in the wake of a mysterious catastrophe and purporting to plot the causes of madness, there’s probably a better text out there for you than the one included in The Drug. But for aficionados of Crowley or those interested in the history through which he lived (useful notes in the back contextualize and offer dates for the pieces in this thick volume), this book is worth the investment of a few dark evenings.