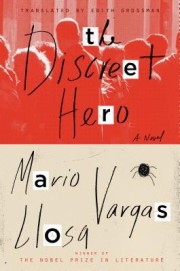 Novelists Ford Madox Ford and Joseph Conrad, beginning in 1898, began one of the more interesting collaborative projects in modern literature, writing three novels together. The books themselves are not great, but the collaboration sparked the pair to codify theories about the novel as a form. Ford wrote, "We saw that life did not narrate, but made impressions on our brains. We in turn, if we wish to produce on you an effect of life, must not narrate but render impressions."

The above explains why The Discreet Hero will disappoint a reader expecting more from Nobel Prize winner Mario Vargas Llosa, the 79-year-old Peruvian fiction writer, teacher, journalist, politician, and all-around cultural statesman of a kind the U.S. just never allows to be created. The distinguished Vargas Llosa has here produced a telenovela, a soap opera, something that would fit seamlessly with the commercial fiction sold at a grocery store. In this book, the emperor has no clothes—a hard thing to say, when the emperor is not a pompous, vain, abusive tyrant but a demonstrably talented artist.

The Discreet Hero doesn’t render, as Ford instructs—it embodies what might be called the hubris of the pre-modern “author-as-God” model in which the reader is expected, like someone zoning out in front of a sitcom, to sit back and not think or feel or evaluate, but to be content with being told what to look at, what to think and feel. Every character, every place, every event, is explained—we’re not shown anger, we’re told someone’s angry, or happy, or aroused, or sad, or scared. There are few actual scenes here; the majority of the book is exposition. This is the author as puppet-master, not bothering to conceal the strings.

The novel revisits characters and settings from previous Vargas Llosa books: Felicito Yanaque, the working-class bootstrap peon who in late middle age heads his own trucking company in the small town of Piura, and Ismael Carrera, urbane octogenarian CEO of an international insurance company in Lima, Peru’s capital. Each faces a crisis—for Felicito, an extortion note, with a spider drawn at the bottom, tacked to his front door; for Ismael, it’s succession issues related to his financial empire and his venal, ungrateful sons.

What things devolve into is melodrama, revolving around wives and mistresses, in which all characters sound alike when they speak, whether 82-year-old Ismael or Fonchito, the teenaged son of Ismael’s right hand man and conscience, Rigoberto—an idealized Platonic teen who acts like an adult, like everyone else in the book.

Nothing much happens except for long patches of “splaining,” as Ricky Ricardo might phrase it, and un-nuanced exploration of morals and family, ending with jarringly neat resolutions of everything. Hints of complexity and shades of gray are eliminated by a kind of harsh bright light. Even side characters who seemed to be coming alive as rounded, real people are turned into cardboard. The end result is literal and uni-directional. Those who do bad things are wholly bad, and punished according to a kind of Romantic, chivalric code. Those who are good suffer nicks and bruises but essentially remain untouched by anything they’ve passed through. And, apparently, real happiness, real art and life, occur only outside of Peru—specifically in Europe’s great capitals. The denouement of the book occurs as the major characters all travel to Europe for a rendezvous in Rome.

There’s race and social class in Vargas Llosa’s documenting of Peruvian society, but it plays out in stereotypes. Women are figured as either maid, Madonna, or whore—and if a wife, all three. As for the other female archetype, the witch—there is one. There is also a subplot involving a character who may or may not be a pederast, or Satan, or a former priest, and this takes up a lot of earnest space and energy—but becomes eventually, in the surgically neat deus ex machina ending imposed on the goings on, a joke.

The prose is conventional, mostly plain, and whether that’s due to the translator or author, quien sabe? Translator Grossman, a major force in American letters, is responsible for, among other things, a definitive and beautiful contemporary rendering of Don Quixote. But here she translates a Piuran slang expletive as “Hey waddya think,” jarringly inserted into casual conversation: “‘Read it to me, Felicito,’ she said, giving it back to him. ‘I can see it’s not a love letter, hey waddya think.’” Whether this results from the tin ear of the writer or the translator, it’s clumsy.

I generally have too much respect for writers to tee off on someone’s work. However, The Discreet Hero raised questions on so many levels, from the micro to the meta, that it felt worse to say nothing. And if the author is playing a massive, post-post modern joke? It ain’t funny, hey waddya think.