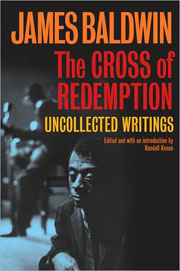 Novelist, essayist, and public intellectual James Baldwin focused his career on diagnosing the sickness underlying American racism and advancing a solution rooted in a notion of radical love. For the American republic to survive its “present crisis” of race relations—exemplified in the horror of church bombs killing children, fire hoses and police dogs turned loose on students—Baldwin argues

This passage, from one of the essays collected in this volume of heretofore “uncollected” miscellany—one short story, several reviews, some speeches, assorted forewords and afterwords, a useful reflection on the 1963 summit of Baldwin and friends with Robert Kennedy, and an urgent plea for challenging bicentennial Presidential candidates “to walk, not ride, through the black streets”—lays out the claims Baldwin reiterated throughout his life.

The base problem is one of categorization, of humans imposing labels on other humans (and, likewise, on themselves); the roots of the American crisis of race relations thus go deeper even than slavery and the fact that America is essentially “a criminal nation, built on a lie.” The deeper source is the fact that humans are unwilling to accept other humans as both other and human. This is a moral problem, located on the level of each and every individual who opts for the use of labels to replace the other (and, indeed, the self) with fantasies and projections rather than facing the ineluctable condition of otherness and simultaneous fellow-humanity that, in truth, define human beings.

Nowhere in American society has the devastating possibility of this impulse toward categorization been as apparent as in relations between “white” and “black” people. “The Negro face, because it is so visible,” becomes the site for projection of the collected “guilts and aggressions and desires” of white America. Most white Americans seem “beyond any conceivable hope of moral rehabilitation” precisely because “they have been white . . . too long,” and this whiteness is a moral choice rather than an immutable, biological condition, Baldwin writes. Likewise, he insists, “you cannot tell a black man by the color of his skin.” For America to survive “the country will have to turn and take me in its arms,” Baldwin writes, meaning embrace all of the black population as fellow humans, in their full human reality, rather than as reductive, destructive labels. As Baldwin frequently says, nodding toward the poetry of his phrasing while emphasizing its practical, political necessity, “this may sound mystical, but at bottom that is what has got to happen.”

It is in regard to the wider ramifications of Baldwin’s basic claims about categorization and its risks thatThe Cross of Redemption has value as something other than a supplement for the shelves of Baldwin scholars or admirers. While this is certainly not a volume for anyone to start experiencing Baldwin (one should begin with one of his collections of essays, or one of his novels, or, for a secondary source, the Standley and Pratt collection of interviews, Conversations with James Baldwin), this gathering of “uncollected” items nonetheless highlights—seemingly by default—Baldwin’s interests in a new and valuable way through repeated engagement with the issue of Jews, Judaism, and Israel.

Jews in Baldwin’s work are presented as existing on three levels of immediate reality in relation to his childhood—Jews as economic oppressors and Jews as a mythological trope, “the Jewish pawnbrokers and landlords of my childhood,” as he writes here, “and my friends,” and—always primary in his understanding, as he frequently admits—the Jews “in the Bible.” This issue of the Jew as economic oppressor is addressed explicitly here, where Baldwin’s basic thesis is “I think it is most distinctly unhelpful, and I think it is immoral, to blame Harlem on the Jew.” There is blame, however, and bitterness, as Baldwin explains it; his personal problem with “American Jews” is that they “have opted to become white.” White identity has been and continues to be an active choice, one that Baldwin claims accounts for wider animosity from blacks, as is discussed in a college question-and-answer session, included here, held as Jesse Jackson’s presidential campaign attempted to respond to Jackson’s “Hymietown” comment. Baldwin is adamant: “A black man does not expect from an American white man what he expects from an American Jew, and when that expectation is defeated, a certain bitterness ensues.” Underlying this expectation is not merely the straightforward logic that Jews have the option of identifying as other than white; religious mythology matters here, too. As Baldwin lays it out, blacks have long associated themselves with Jews through a shared connection with the Jewish Bible, particularly such central narratives (to both peoples) as the Exodus from slavery in Egypt. “‘Let my people go,’” as Baldwin says, “all of those legends black people have lived with and made real up until this hour—and that means that unconsciously a black person tends to expect more from a Jewish person than he expects from anybody else.”

Israel, meanwhile, supplies arms to Apartheid South Africa and “is sustained by a blank check from Washington” while hypocritically—so Baldwin says—claiming allegiance to God. Baldwin nonetheless insists that he is “ambivalent concerning the physical purposes of the state of Israel,” though he makes it clear that he “would not like to be an Arab in Jerusalem.” Despite the key role that Holocaust metaphors play in Baldwin’s rhetoric—included in this volume is a letter to an imprisoned Angela Davis, who he compares to “the Jewish housewife in the boxcar headed for Dachau, or as any one of our ancestors chained together in the name of Jesus, headed for a Christian land,” and he frequently compares the state of blacks in racist America with that of Jews under the Nazis, citing concentration camps and gas chambers and ovens as he does—he advances an argument in these pages that the Jewish state is predicated on a doubly false claim. First, the very category of “Jew” is a problem, just as “white” or “black” is a problem, differentiating humans, in their infinite otherness, from each other and thus erasing the very real otherness with a false claim of solidarity and group identity. Second, however, Baldwin claims that Judaism, as a religion, no longer exists. “I mean, the Jews themselves do not believe in it anymore: it was simply one of the techniques of their survival—in the desert.” While it is fair—or at least in accord with his broader logic—to claim that Zionism is rooted in “tribal” logic, and to insist that we must all “transcend the tribe,” this claim about Judaism as an extinct religion is, to say the least, strange—a product, likely, of a kind of Christian naïveté.

After a stint as a child preacher, Baldwin famously abandoned the church and denied belief in the religion in which he was raised, yet as he repeatedly notes, he remains a product of that religion, rooted in its rhetoric, dependent upon Christian concepts and symbols as well as church preaching styles and a prophetic mode of presentation. His career as a writer and public figure is explicitly undertaken in the hope that “an immense metamorphosis” can occur in society, within the heart of each individual—a moral metamorphosis, predicated first on white self awareness and then on a new form of relation between all peoples. In conveying the elements of the ethical problem at the root of racism, as well as the human solution he conceived for this problem, Baldwin employs the language of Christianity. The necessary apprehension that “the other is oneself,” is, as Baldwin describes it, the “recognition of what it means to love one another, which defines freedom, which brings it to being, which makes it as real as the Word become flesh, to dwell among us.” Likewise, the basic dynamic of racism—teaching some children “that their lives are worth less than other lives, and that they can live only on terms dictated to them by other people, by people who despise them”—is described by Baldwin, repeatedly, as a “sin against the Holy Ghost,” that sin which cannot be forgiven.

While Baldwin finds the reality of American Jewish existence in jarring contrast to his image of the Jew as a Christian biblical trope, his denial of the reality of Judaism as a living religion seems rooted in its own contrast with his adaptation of Christianity, the language and symbolism from his religious upbringing that he uses to frame his moral mission. Religion, viewed through the lens of Christianity, becomes for Baldwin entirely about that act of embracing the other, offering love in excess and without reserve, while adopting a prophetic tone of mourning and condemnation through which to educate the citizenry on their failing to love in this way. Judaism, rooted in the sense of responsibility to God to offer hospitality to the stranger, is also a religion centered, ethically, on the other, but it does not use the Christian mystical language of love—and for Baldwin’s understanding of the world, this mystical language constructs the only religion that can matter, the only religion that can be real.

Thus, Judaism is jettisoned, in what may well be offhand moments for a writer who, while coming back again and again to the Jews as a subject, frequently prefaces his pronouncements with the claim that “I have never really written about Jews” precisely because he has been “too close” to Jews on all three levels—as actual individuals and friends, as collective stereotypes, and as mythic model or trope. This excessive visibility of the Jew is an inheritance of the black church, where, rhetorically, the Jew is displaced. In short, the “my people” to be let out of bondage become the black audience; the narrative of the Exodus is re-written as it is re-read, claimed by black Christians who use the metaphor of the Jew to understand their own location, leaving all those real flesh and blood Jews torn free from the mythological grounding of their self-chosen category and looking—all the more in contrast with those Jews in the Exodus narrative—like so many Shylocks preying on the poor blacks. “Israel” as a trope becomes those blacks in the ghetto held down in bondage, while Israel the state becomes another white political entity holding down other, darker peoples, who could themselves be lined up with the metaphorical “Jews” of the Exodus narrative.

Baldwin engages in this move by reflex, yet he does not do so without some understanding of what he is doing. Had he decided to “write about the Jews” in earnest, he would have found, in this entanglement of trope and reality, a dynamic of replacement by “label” easily as complicated as those he explores in relation to white/black racism or the constructed categories of homosexuality/heterosexuality and, as he also argues in his oeuvre, male/female. Despite, then, a grab-bag approach to the “uncollected” James Baldwin, The Cross of Redemption highlights Baldwin’s wider theories via the leitmotif that emerges around Jews, Judaism, and Israel.