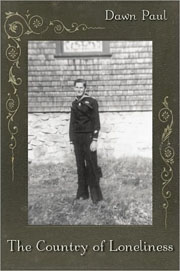 How do you understand a taciturn and truculent father who died when you were twenty? Lacking family recollections, Dawn Paul has interwoven real and imagined narratives of her father, Philip, to create this novel inspired by real-life events.

Understated, The Country of Loneliness mimics living with an alcoholic: it’s filled with fear, detachment, and smashed hopes. Paul alternates between her childhood and her father’s, shaping a likable, lonely boy who also grew up with an alcoholic father, Philip Sr. Of her own girlhood, she writes:

My family is not poor . . . We have money, but my father owns it, decides how it is spent. If I need a winter jacket . . . my mother braids my hair so I look nice and signals when he is in a good mood. . . . It is understood that I can get away with asking, he will not yell at me or hit. But I am afraid every time.

While The Country of Loneliness is grim, moments of life emerge. With ambitions to run a big company, Philip’s sister Ruby “wore frayed dresses lightly, the line of the old let-down hem showing, as though she would not be wearing such clothes for long.” Yet by chapter’s end, Ruby is pregnant. “Inevitable, a future planted in Ruby’s young body before she’d even started her own.”

Crushing chapter endings frequent the book’s first half. Philip’s father shames him publicly; Philip’s mother chastises him for speaking condescendingly to an adult. Individually, these heartbreaks are powerful; as a group, though, they become repetitive and even predictable.

Fortunately, the author shifts away from this pattern. When Philip and Ruby discover their father’s illiteracy, Paul avoids the anticipated blow-up, instead sending Philip Sr. out of the house, imbuing Philip Jr. with power, then shame. “His father’s failings . . . did not bolster him, they weighed on his wide, bony shoulders.” The elegant contrast of wide and bony drives home Philip’s complex feelings and hints at the conflicted man he will become.

Memoirs often progress from strong to middling, but this fictional adaptation moves from strong to stunning, from immobilized to initiator. As World War II approaches, Philip defies his parents and joins the Navy. In the parallel story, Paul defies her parents and drops out of college.

Near the book’s end, Paul tackles that essential question: Why did her father become who he was? Asked “What was the war like, Dad?” Philip offers rare honesty. “War is being on a boat watching ships get blown out of the water and knowing your buddies are on them.” Paul’s subsequent description of her father on his ship’s bridge—the smell of oil, the heat of flames, the grime on his cuffs—astounds.

Despite this revelatory shift, Philip’s death is not mawkish, but instead reveals the complexity of emotions among daughter, doctor, and the dying. As author and daughter, Paul reaches a fittingly jumbled peace between her and her father—both the man she knew and the man she was forced to invent.