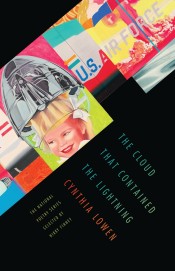 There's something magical about a persona poem. The Latin root of the word “persona” helps explains why: mask. The poet steps out of her own identity and embodies the person called forth by the mask. But when the transformation doesn't fully occur, the audience is left with a creation not entirely the poet or the mask. Sadly, that's the case with most of the poems in Cynthia Lowen’s The Cloud That Contained the Lightning, which was selected for the National Poetry Series by Nikky Finney.

Robert J. Oppenheimer, "the father of the atomic bomb," offers a rich, complex subject, one much written about in historical accounts and biographies, yet few poets have taken on his persona (only Ai, in her poem "The Testimony of J. Robert Oppenheimer," comes to mind). Perhaps this is because he was such a complex figure, with his brilliant mind and skillful leadership (herding cats must be easy compared to organizing physicists). On the other hand, he developed a weapon that devastated two civilian populations. He even specified that the Hiroshima bomb be exploded above ground in order to make the blast more destructive.

Cynthia Lowen thus deserves praise for taking on this major figure of the twentieth century, though it makes it all the more disappointing that some of the poems lack depth. Take "Bedding Down,” which begins with an arresting revelation:

Sometimes, when we are lying here,
I have the urge to pull my hand
from your breast, ball it into a fist,
and smash your near-unconscious

The poem promises to show us Oppenheimer’s underlying character, which might help us to understand how such a brilliant mind could create such a horrific weapon. But the poem quickly unravels in the next stanzas. We see no action, hear no words spoken by Oppenheimer to this lover, nor do we hear or see the anonymous lover.

This buried anger returns in "Quantum Mechanics," which presents another unspecified female. Now Oppenheimer’s anger encompasses all women: "I watched her brush her hair / and thought of all the women, at that moment, brushing their hair¬— / wanting to yank a whole handful from her head / so she'd tell me what a prick I am." Yet once again the poem tell us nothing more. Did he act on his violent thoughts? Is this woman his wife? Mistress? If this trait is important enough to appear in two poems, why not explore it further?

"Building a House for the Boat," which opens with a quotation on Oppenheimer’s wife ("Kitty drank with an abandon"), seems to be a persona poem in Kitty Oppenheimer's voice. In the poem, a drunken figure muses on water imagery, but the voice remains lost and powerless: "I can't help wanting the fish to say something." The reader is in a similar situation: we can't help wanting Kitty, if that is indeed her speaking, to say something about the cause of her drinking, about her husband, and about his work.

There is one moment in the book, however, when a persona feels fully embodied. In "The Scientific Method,” we hear Oppenheimer trying to justify his actions:

because this is not about destruction
but generation through methods
associated with destruction . . .

Here Lowen captures the tormented scientist wrestling with his ethics. The "gadget," as the creators of the bomb called it, represented an exciting scientific breakthrough to Oppenheimer and his colleagues, albeit one designed solely to destroy. Here we see the persona poem at its best, plumbing the depths of this disturbed and disturbing man’s psyche.