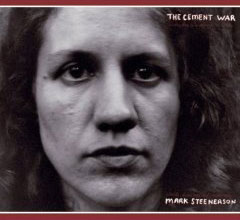 “Life’s a bitch, and then you die.” So says the bumper sticker, and there are days in Minneapolis in February that bear it out, the streets in rags of dirty snow, the sun seeming to have lost all interest in ever shining on the Earth again. Spirits cast down, people get sad, and some, for insurance purposes, get SAD. A Nordic form of the blues wipes the slush off its boots on the doormat of your soul and settles in, forcing you to smell its socks. In his book The Cement War, the Minneapolis blues musician, poet, artist, and photographer Mark Steenerson evokes the sloughs of northern despond so convincingly that it takes an effort to haul yourself out of them after closing the book.

The Cement War, handsomely published by Steidl (an adventurous German publisher of photography books, including those by two other Twin Cities photographers of note, Greta Pratt and Alec Soth), is not a book of photographs produced on the template of a conventional monograph, but rather the diary and cri de coeur of an oppressed spirit. Steenerson’s grainy black and white photos are parts of a skein composed also of fragments of his handwritten poetry and visionary drawings. His photographs owe something to the work of his friend and mentor, Robert Frank, his poetry something to Hank Williams and Jack Kerouac, and his drawings something to William Blake, the Reverend Howard Finster, and anyone who’s ever doodled with ballpoints on the canvas covers of school notebooks.

The excruciated premise of The Cement War is that life is a wound. The artist wanders a landscape of spiritual desolation, searching for grace, a glimpse of love, release from an unremitting loneliness that seems to feed on itself the more he fixates on it. The book is the plaint of a man of constant sorrows, the sorrows so compulsively reiterated that the recitation of them through visual and poetic clichés becomes an aesthetic engine of its own, a self-fulfilling mechanism practically guaranteeing that the wound of existence will continue to suppurate. The artist has made a pet of fruitless suffering, and occluded his own vision with a strangely unembarrassed self-pity—but despite the stranglehold of solipsism on his aching heart, some of his photographs take a true, if melancholy, joy in the existence of others. There is one shot in particular, of a woman in a dress running barefoot across a street, that quotes Henri Cartier-Bresson’s great photograph of a man jumping a puddle. She is caught mid-stride in mid-air, and with that is the suggestion that people have it in them to be angels.

Steenerson makes use of an interesting editorial device in the layout of his photographs, which aren’t presented contiguously but interspersed with pages of writing, drawing, and enlarged detail. In the photograph just mentioned above, for instance, he shows the photograph full-frame on the left-hand side of the spread, and then enlarges its salient feature, the woman, on the right-hand side. He asks you first to look, then to look more closely at what grabbed his heart. He employs the device repeatedly throughout the book, sometimes returning to the same image several pages later, and the effect can be quite beautiful. He often does this with photos shot from inside a car; it’s as though he knows he shot initially from too far away and must get closer (and bring us with him) to feel what was there. This means grain the size of gravel, but the graininess itself is expressive of an anguished reach across a gulf that might not otherwise be bridged by a man so alienated from the hope of closeness.

The Cement War is a dark book. Its bleak meditations lie heavily on the spirit. Poring over its pages, I kept thinking of Oscar Wilde’s epigram: “Life is a comedy for those who think; a tragedy for those who feel.” For Wilde, of course, life was both. The Cement War leaves no doubt that it is our fate to pass through a vale of tears. Given that, the risk this artist should take now is to laugh.