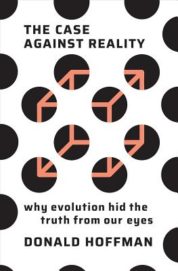 With our current times flavored with an ample dose of unreality, we might be more receptive than usual to ways of thinking that transcend the familiar and anodyne. In other words: strange times have a way of opening the mind.

It’s an appropriate moment to engage with the profoundly provocative The Case Against Reality by cognitive scientist Donald Hoffman. Although one might be tempted to regard it as hyperbolic, the book’s title is a straightforward description of what lies between its covers; Hoffman indeed methodically makes his case over 272 densely reasoned pages.

The essential argument is twofold. First, Hoffman posits that the lessons of Darwinian evolution lead us to the conclusion that fitness—broadly defined as actions that promote our well-being, survival, and capacity for reproduction—will always take priority before truth in our perception of reality. Second, he argues for what he terms the Interface Theory of Perception: The information our senses provide to us, including their variability and textures, are representations of another, currently unknowable reality. It’s an elusive concept that Hoffman undergirds with the sturdy metaphor of the computer desktop, populated with icons and symbols with choices and consequences that do nothing to reveal the actual workings of the processing machine underneath.

Once we’ve ventured into this terrain, Hoffman presses further into contemporary quantum physics to make the case that there actually is no reality that exists outside of consciousness and observation. After a somewhat repetitive style in the early chapters, Hoffman gathers momentum, elegantly explaining and interpreting concepts such as Quantum Bayesianism and Stephen Hawking’s holographic principle to show how objective reality itself is being discarded on the cutting edge of physics. “What we do understand, many physicists now tell us, is that spacetime is doomed,” Hoffman writes with characteristic bluntness. “Space and time figure centrally in our daily perceptions. But even their sophisticated union into spacetime, forged by Einstein, cannot be part of a true description of the fundamental laws of nature.”

The Case Against Reality includes a great deal of thoughtful exploration into vision, color, and illusion to bolster Hoffman’s essential point that our perceptions take shortcuts—that they are an imperfect approximation of something potentially unknowable (though he maintains scientific optimism on that front). In these passages, his narrative feels assured and focused, and more experientially relatable than earlier references to mathematical proofs that purportedly predict outcomes of natural selection.

Hoffman has a lot of heavy lifting to do with this short book, and the result is potentially paradigm shifting for the receptive reader. Furthermore, while his persuasive focus is on the districts of scientific understanding, his ideas are easily applicable to such realms as Buddhist philosophy, which in some interpretations maintains that our world is indeed generated by consciousness, with no existence independent of it.

This is essentially Hoffman’s sweet spot, and the final passages of his book are metaphysically challenging but also intellectually thrilling. Positing a theory of “conscious agents” that make up higher reality, and which coalesce into entities of greater and greater complexity through natural processes, Hoffman again employs math to point a flashlight into the void. He speculates on the possibility of our eventually understanding the infinite, suggesting a “scientific theology” that could point the way toward a God who is not “a magician” but understandable within a framework of the mind. It’s a high-wire act that could only stay aloft after the argument built by the earlier chapters.

In this, Hoffman delivers on the promise of his title. While it’s an impactful work indeed that’s capable of making one question one’s assumptions, it’s another thing entirely when it calls into question the veracity of the senses, the passing of time, and the existence of objects themselves. Rather than inspiring despair, however, The Case Against Reality lends hope for the vision of a real synthesis between science and spirit, and the possibility of bridges between the two realms long thought to be mutually exclusive.