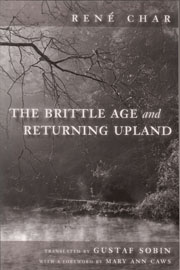 It is well known that the philosopher Martin Heidegger, who wrote at length about the poet’s ability to reveal the human condition, was an admirer and friend of René Char. Char’s writing is gracefully tethered to a poetically present metaphysics—and such philosophical instincts are clearly evident in The Brittle Age and Returning Upland.

These two books, written in the mid-1960s and now offered as a bilingual collection, were translated from the French by the late Gustaf Sobin, who was, early in his own writing career, mentored by Char. In his introduction, while relaying his personal connection to Char, Sobin also offers a precise context for these poems: “René Char taught me, first, to read particulars: that the meticulously observed detail, drawn from nature, could provide the key to the deepest reaches of the imaginary.”

The aphoristic, often single-sentence poems that compose The Brittle Age require the type of reading patience summoned by a haiku or koan. However, Char’s visceral and relentlessly metaphysical verse offers a grittier, less harmonious account of existence; in the tradition of classically French existentialism, Char manages to distill minute facets of absurdity through lines like “I’ve had, since birth, an aggressive breathing.”

Char meditatively engages the struggles of existence, and his exquisitely harnessed angst ultimately finds solace in death, with sobering utterances such as:

Be consoled. In dying you return everything
that you were lent, your love, your friends. Even that
living coldness, harvested over and over.

With each page devoted to an unusually short passage such as “To suffer from the ache of intuition” and “To abolish distance kills. The gods only die by being among us,” The Brittle Age requires a lucidly steadfast patience, because the mind intuitively seems to cadence brevity. But in its minimalism, Char’s words resonate much like negative space, and the blankness of the surrounding page is eerily present. This contrast offers the self-controlled reader an opportunity to savor Char’s highly attuned poetic—a poetic that with stringent economy and conviction, turns words into precious conveyors of human perception. Such an evocative testimony beckons our return to both the dog-eared passages and the collection’s impact as a whole.

Slightly more varied in length and impact than The Brittle Age’s stark gravity, Returning Upland is still ethereally shrouded in the poet’s restless consciousness. However, amidst perceptions of chaos and absurdity, Char’s writing remains clearly orchestrated; emotive realizations and philosophical theories are connected to political and cultural references of French towns and regions with a meta-present observational suffrage, as if with each breathing perception, an undeniable weight pushes. And with the help of the book’s glossary, poems such as “Seven Fragments of Luberon” embody both symbolically and at times literally, the significance of eroded landmarks in a perpetually disparate human landscape.

Many of the longer prose poems, such as “Slowness of the Future,” further extrapolate ideas put forth inThe Brittle Age, but the impact here is juxtaposed with narrative threads, ultimately offering more lyric depth to the philosophical impulses, as seen in the later half of the poem:

Death in life is repugnant, nonalloyable; death,
however, within death is something accessible, is
nothing: a frightened belly could crawl there without
trembling.

I have overthrown the last wall, the one that
encircles the snow nomads, and I see—o my very
first parents—the candelabra’s summer.

Our figure on earth is only the second third of
a continuous pursuit, a point, upland.

Overtly solemn, many of these poems slyly circumnavigate the ordinary while devastating and invigorating the reader’s consciousness with a viciously individualistic humanism, as seen in “Precursor”:

In a rock I recognized death, fugued and
measurable, the open bed of its little accomplices
beneath the shelter of a fig tree. Not a sign of a
carver; at the base of night’s stairway each morning
of earth opened it wings.
Without repeating, freed of the fear of men, I
dig in the air my tomb and my return.

Although Char’s perceptions are rooted in an undeniable individualism, they inform universal human struggles as they work towards an oddly liberating but always stuttering grasp of mortality and existence. Perhaps Heidegger, who feared that language’s true meaning was being eroded, saw in Char a poet who transcended language, as these poems hold us accountable for our very consciousness, regardless of their translated diction, length, or form.

As with any of Char’s writing, the reader of this collection will find no shortage of sophisticated cognitive and linguistic tonalities steeped in an existential worldview, and these philosophical underpinnings only enhance the poetic impressions. René Char’s lens on reality is simply fascinating and unique, and these translations of The Brittle Age and Returning Upland are a vital addition to his English language body of work.