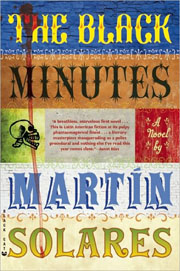 On the first page of Martin Solares’s debut novel, The Black Minutes, the question is posed: “Isn’t it true that in the life of every man there are five black minutes?” What follows, before that question is explored in detail much later, is a crime story set in different decades, in which we follow parallel investigations by two different detectives. Ramon Cabrera, in presumably the early ’90s (the Internet and cell phones don’t seem to be prevalent yet), is investigating the murder of a journalist named Bernardo Blanco; this leads him to notes on a case involving a murderer who killed several girls back in the ’70s. The bulk of the book follows this second case, as detective Vicente Rangel tries to fight the good fight in a system in which everyone is corrupt: the politicians, the cops, the media, the Catholic church . . . and the rich and powerful get away with anything they want. Cabrera’s investigation bookends the novel, as both cases join together.

The book is a little light on character development, but it gives an interesting look at the life of a police detective in Mexico—in one scene they try to get the boss to “help us out with our gas,” since they have to pay for their own gas most of the time. There are some other engaging moments in the book, moments in which various characters dream or hallucinate, such as a scene where Alfred Hitchcock comes out of a motel pool to discuss the lack of believability in Psycho.

Solares puts together a solid, if a little predictable, crime thriller. His biggest problem is that Roberto Bolaño set the bar for Mexican crime fiction incredibly high with his mammoth 2666, and The Black Minutes is lackluster in comparison. Most of the prose is workmanlike, with plenty of clichés. Solares seems to see no point in offering up much in the way of description, such as when he writes “She showed him a bottle of oil that smelled really, really good”—maybe this is faithful to how “real people” talk but it doesn’t make for interesting reading. Elsewhere, we hear: “His leg was throbbing. A movement as simple as depressing the accelerator caused shooting pains. As he waited for the green, a pickup with blacked-out windows that had pulled up on his left side suddenly went in reverse. He didn’t pay much attention because the pain in his leg was killing him.” We’re told three times in four short sentences that his leg is in pain, but that’s it—there’s no development, and no sense that this just might be boring for the reader.

Action and believability also don’t seem to be strong suits for Solares. Check out this fight scene: “Even though Wong planted a right hook on his face, Rangel was agile enough to dodge the following punch and give him an impeccable kick.” An impeccable kick? The laws of physics don’t seem to matter much, either: “Taboada kicked a metal file cabinet that tumbled down the hallway toward the detective.” How is that possible? One might assume that Solares is going for a cartoonish humor, but in this translation the effects come off as poorly worded mistakes rather than artistic flourishes.

Some of the quirkier characters make the lousy prose more bearable, characters such as the retired Dr. Alfonso Quiroz Cuaron, known as the “Mexican Sherlock Holmes” (a nickname he reviles), who is formulating a mathematical equation to catch killers. Again, however, one can only think of 2666 with its similar character Albert Kessler, who is much more developed. In short, The Black Minutes is a pleasant diversion for crime novel aficionados, but those seeking the impeccable kicks of great writing should look elsewhere.