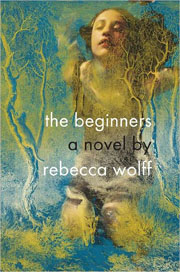 There’s a sub-genre of New England storytelling that traveled to the New World in ships, its roots dating back centuries to European folktales and works like the Malleus Maleficarum. In this strain, quaint locales and panic toward the unknown are combined with the dark underbelly of magic and the occult. Think Nathaniel Hawthorne or Shirley Jackson, H. P. Lovecraft or Stephen King.

That this variety remains popular today is perhaps a testament to the staying power of the antiquated beliefs of the Puritan settlers, or the allure of the real-life events that unfolded in Salem and surrounding villages in the late 17th century. Whatever the reason, many authors seem to believe that the devil has selected the charming small towns of the northeast to play his games. So it seems appropriate that Rebecca Wolff, whose poetry flirts with images of ghosts and witches in collections like Manderlay and The King, has conceived the fictional central Massachusetts municipality of Wick as the venue for her unsettling debut novel. A tale of adolescent yearning and fascination, The Beginners offers generous nods to these well-told tales while twisting their narratives into something original and satisfying.

Wolff’s heroine is fifteen-year-old Ginger Pritt. A bit of an outcast, Ginger works part time at the local café and spends her free hours devouring books while hanging out with her best friend, Cherry. The duo are pretty much inseparable. They think alike—or at least they used to, because as summer fast approaches, Ginger notices that Cherry is suddenly more interested in talking about boys than playing castle in the town’s old mill (the place where, as Ginger puts it, the two of them are able to be “lonely as one.”). Seeing her friend mature in ways she cannot yet relate to leaves Ginger wondering about her future. “So this is how it’s going to be,” she thinks to herself. “There is a way to grow up, I’m sure of it, that does not require of us this abject absorption . . . in what? In the hypothetical thought processes of a boy—or man—we only know by family name, by house, by car?”

Enter into the narrative a pair of older, mysterious strangers, Theo and Raquel Motherwell. Full of daring banter and a tone of worldly sophistication, Wick’s newest residents quickly take a shine to young Ginger, and before long, the girl can’t stop thinking about them. Charmed by the fact that they’re the first people Ginger and Cherry have ever seen move into Wick, the girls find themselves whiling away the summer days at their home, listening to their stories, even though Cherry expresses hesitation at the Motherwells’ odd demeanor (“. . . those people are so bizarre. Raquel told me the weirdest things about her and Theo. Maybe I shouldn’t even tell you. It’ll just freak you out . . . I know how squeamish you are about boys, and sex, and that stuff.”).

But these outlandish tales do not drive Ginger away—rather, they pull her closer to the Motherwells, and as the warm months pass, Ginger spends an inordinate amount of time by their side, choosing these strangers over Cherry and her own family. When Raquel mentions a family connection to the witch trials of Salem, Ginger begins to wonder if the Motherwells may be witches themselves, and if a spell has been cast upon her, one that prevents her from escaping the magnetism of Theo and his sandy hair, of Raquel and her graveyard anecdotes. Days fold into weeks, events trip over themselves, and before long, The Beginners dives full tilt into the manic obsessions that course through Ginger, transforming the novel into a pulsing fever dream, where situations may or may not be real, narrative threads border on the pornographic, and the world outside of the small bubble Ginger has created is voided. There is a genuine creepiness afoot here. The Motherwells, be they students or sociopaths, lovers or siblings, have the enchantment of a Jim Jones-type over Ginger, and watching her repeat scene after scene with slight variation is fascinating and frustratingly entertaining.

Although Wolff has crafted an attractive story in The Beginners, something remains puzzling about Wick. The author injects plenty of regional touches that will please those familiar with central Massachusetts—old mills, Polish bakeries, and Janine’s Frosty, an actual eatery in real-life Ware, MA—but there are also embellishments that fail to ring true. For example, when Ginger mentions that Wick is “more than ninety minutes away from a large university” early in the narrative, “far enough to be unthinkable for commuting,” the link to the area is lost, as no town in central Massachusetts is this far from such an institution. Small flourishes like this may add a touch of drama and a sense of hardship to the characters, but they also make the setting feel contrived. Ginger’s description of the Motherwell’s house, “a stage set, or even a sketch for a stage set,” could also be a valid portrayal of Wolff’s Wick.

Despite this, The Beginners has enough peculiar energy flowing through its pages to keep the reader’s attention. A meditation on the easily influenced teenage mind, with the added dashes of witchcraft and sexual maturity, this poet’s debut novel is a pleasant and satisfying read.