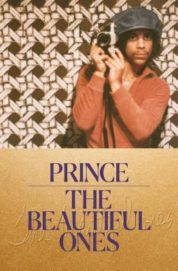 What The Beautiful Ones does most successfully is remind us that Prince is dead.
Each page of the book is culled from the musician’s vast archive by Dan Piepenbring, who’d been selected to co-write the book with Prince before his death in April of 2016. Prince had told Piepenbring, “When it comes to your life story, don’t let anyone else hold the pen.” Unfortunately, the absence of Prince’s hand is felt acutely.

This is not to say the book isn’t illuminating. There are moments at once comical and brilliant, where Prince becomes, extraordinarily, just another person who has to “brush [his] own teeth.” This happens when we see him fall for a girl with acne, a trait he says “made her just vulnerable enough that she was approachable & not out of a brotha’s reach.” His humanness is visible in the scrapbook he kept while making his first album—that he kept a scrapbook to begin with, the preciousness of that act—where he plays pranks both on the subjects of his photos and the eventual viewers. Even in the behind-the-scenes notes, where Piepenbring recounts the story of Prince trying to convince his then-girlfriend, Denise Matthews, to go by the stage name “Vagina” (pronounced like the name “Gina”), we have to confront the reality that although he was incredibly talented, and perhaps a true genius (whatever that is), Prince was also once a childish teenager. As he told Piepenbring at their first meeting, “I want my first book to be better than my first album. I like my first album, but . . . I’m a lot smarter than I was then.”

Rather than captions under photos, there is a robust notes section in the back of the book which informs the reader when and where a photo came from, and gives some context for that moment. As one flips through this archive of Prince’s life, they must also flip to the back for these notes, so that in the end, when one reaches the final photo (“Prince, resplendent in the spotlight during the Purple Rain tour in 1984”), one has the impression that there is more to the story—that Prince will continue on after this moment. When you turn the page, however, you have only managed to return to the beginning. It feels like a metaphor for Prince’s absence and persistence—for how his early music continues to punctuate our lives, and for the way so many of us are still waiting to see what happens next.