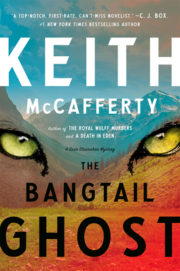 Keith McCafferty’s latest novel, The Bangtail Ghost, begins with a strange and violent death at the end of a forest road in the mountains of Montana. Blood in the snow, a puma whisker, paw prints, and drag marks lead to the remains of a woman’s mutilated body. If these first few clues were all there were, Sheriff Martha Ettinger might have declared it an unfortunate misadventure, but when the mystery deepens with screams in the night, a flickering light, and a growing list of missing persons, she hires the private detective Sean Stranahan to help sort it out.

After the dead woman’s profession and some of her clients are exposed, what looked at first to be a straightforward case of mountain-lion-kills-innocent-woman turns into a conundrum. Then, with evidence of more than one mountain lion and human interference, a professional tracker with hounds is engaged to help Stranahan hunt them down, only to wonder if they, too, are being stalked.

Once you’ve read a Keith McCafferty mystery you’ll recognize the style, a rapidly rising drama that turns into a whopping good whodunit—or in The Bangtail Ghost, a what-dunit. The author is a master at writing tense, gripping page-turners. His Montana-set Westerns, however, are unlike the classics of Louis L’Amour or Zane Grey. Rather, starting with his first novel, The Royal Wulff, McCafferty has written compelling, contemporary, and adventurous mysteries. Each plot reflects the author’s combined expertise as a Field & Stream magazine editor, an angler, a hunter, and an expert on camping, hiking, backpacking, and fishing. Adept at weaving passion into his stories, it is no surprise that he has become known as the founder of a unique sub-genre known as “fly-fishing noir.”

McCafferty’s characters are modern, earthy Montanans whose lives reflect openness and good humor—and, at times, darkness. They have come from all walks of life to settle in the changing American West. They live, talk, walk, hunt, fish, drink, and shoot pool together, and occasionally get caught up in strange doings. Sean Stranahan, the series’ protagonist, is also a talented painter and a popular fishing guide who demonstrates while working his cases both where to cast the best hand-tied flies and how to entertain readers.

Each of McCafferty’s novels reflects his own experiences in the wild, combined with in-depth research to sustain realistic plots. For example, Cold Hearted River (sixth in the series) involves the (fictitious) discovery of a trunk full of fishing gear and some early writings that once (in real life) belonged to Ernest Hemingway. A Death in Eden (the seventh) derives from actual public outcries over a proposed copper mine in the head-wa¬ters of the Smith River and the likelihood of it spewing environmental destruction. In The Bangtail Ghost (the eighth novel), McCafferty reveals his immense knowledge of mountain lions that sometimes become man-eaters, intermixed with some nefarious activities attributed to one or another of the novel’s shady characters.

It’s been said that all books are mysteries, and Keith McCafferty’s award-winning Westerns prove it. His books are worth reading because what lures us all is something the tracker points out to the private eye while stalking and being stalked in the mountains. “We like a yarn,” he says. Indeed!