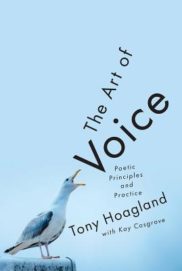 Just as he’s gone for keeps, Tony Hoagland, true to his ironical being, is more than ever with us. His seventh full-length collection of poems, Priest Turned Therapist Treats Fear of God, came out last year from Graywolf Press just prior to his death, and is followed this year by The Art of Voice, a heartfelt, book-length essay about the craft of poetry.

As with Hoagland’s prior books of prose, The Art of Voice demonstrates that this poet’s friendly provocateur brio didn’t quit with his poems. As many of his former students (including this writer) can attest, he took teaching seriously and was an apostle for poetry as an undervalued field of learning and endeavor.

Twenty Poems that Could Save America (Graywolf, 2014) extended the discussion with attention to diction and idiom, along with Hoagland’s takes on particular poets, including Robert Bly, Frank O’Hara, Sharon Olds, and Dean Young. The title essay is a manifesto for updating poetry pedagogy, and includes this sporty salvo: “pretentious ponderous ponderosas of professional professors will always be drawn to the poems that require a priest.”

The Art of Voice differs from the two earlier prose books in that there’s a gravitational center that holds from beginning to end. The theme, “voice,” is a concept every poet has thought about, at least to the extent that the idea of apprentice writing is to “discover your voice.” On the surface, it sounds simple enough, but Hoagland points out that voice isn’t only a means to distinctive poetry, but an aesthetic end in itself:

One of the most difficult to define elements in poetry is voice, the distinctive linguistic representation of an individual speaker. In many poems voice is the mysterious atmosphere that makes it memorable, that holds it together and aloft like the womb around an embryo. Voice can be more primary than any story or idea the poem contains, and voice carries the cargo forward to delivery. When we hear a distinctive voice in a poem, our full attention is aroused and engaged, because we suspect that here, now, at last, we may learn how someone else does it—that is, how they live, breathe, think, feel, and talk.

As Hoagland conceives of it, voice is also a branding element of American poetry. “At the risk of sounding naively patriotic,” he says, “such aliveness of voice seems like a special strength of American poetry in the last hundred years.” One of his essays in Twenty Poems, “Litany, Game and Representation,” roughed out the historical course of poetry in relation to post-modern unease about the indeterminacy of language, arriving at what he called “New Poetry”—less invested than prior poetry in conveying experience, more involved with linguistic play for its own sake.

In The Art of Voice, the poetry Hoagland mapped out previously as “New Poetry” becomes, with a shift in emphasis, “voice poetry,” and the book is, chapter-by-chapter, a user’s guide to its techniques. A core principle is that as readers we want to encounter a speaker who “presents a convincingly complex version of the world and of human nature.” To read a poem, says Hoagland, is to enter a relationship, and if we’re going to hang around, we want it “to be with an interesting resourceful companion.”

The techniques he offers—developed with examples and exercises (writing prompts)—include, for instance, having a speaker change his mind over the course of the poem, using vernacular diction and varying speech registers, and importing multiple speakers into the same poem. A voice poem, says Hoagland, may disobey the dictum that each word in a poem must be there for a reason. In a voice poem, some phrases serve no purpose, for instance, beyond inducing conversational bond with the reader. “Here’s the thing,” for instance, or famously, “This is just to say . . . .”

Consistent with Hoagland’s prior prose, The Art of Voice promotes thinking in directions that go beyond most writing about poetry, at least with this degree of clarity and concreteness. The poems he draws from as examples are fresh, not the usual suspects, and you get the feeling that Hoagland read almost every new book of American poetry as it came out.

People are strange, and personalities come in infinite variety of quirkiness and virtue. The Art of Voice wants poems of equivalent richness, poems that linguistically enact freedom of the mind at play. Some of the vivid images and sinuous sentences Hoagland has bequeathed to readers aren’t even, in an important sense, his to bequeath, but belong to poets who will write more and better due to the gift of this book.

An overview of the poetry of Tony Hoagland appears in the Summer 2019 Print Edition of Rain Taxi Review of Books. Purchase this issue here.