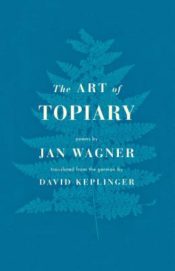 It is uncommon for a book's title to summarize its contents as accurately as German poet Jan Wagner's The Art of Topiary. The collection, Wagner's first translated into English, is full of poems that clip the ordinary into precise shape and sound. In Wagner's handling, objects reach their fullness through an examination of their margins. If topiary is the art of trimming into shape, then much of Wagner's poetry in The Art of Topiary can be described as the art of examining the edges. The book collects thresholds.

In his poem "gecko" Wagner marks a lizard "hurrying over the wall: a wandering crack that heals itself from behind." The lizard is defined, in part, by the space it leaves uninhabited. This fragment of the prose poem shows Wagner's concern with the places where one thing ends and another begins. It also reveals how delicately and effectively he employs sound. The perceptible alliteration of wall and wandering is complimented by the repetition of the voiceless, and not as readily detected, H—hurrying, heals, behind.

Because The Art of Topiary is translated, credit for the sonic qualities of the English versions of these poems goes predominantly to American poet David Keplinger. Keplinger writes in his introduction that he prefers the term collaborator to translator and describes the balance between "connotation, form, and literalness" that was achieved through numerous exchanges of drafts between himself and Wagner. Also in the introduction, he makes specific reference to his work on "gecko" saying that translating the poem "involved reproducing the alliteration, assonance, and consonance of Wagner's original." In addition to these more subtle sonic elements, Wagner's poetry employs rhyme. He is the rare contemporary poet who can use and adapt established forms so naturally that they are enjoyed long before detected. Even the highly structured poems in The Art of Topiary sound natural and appear driven as much by sense, by intellectual aim, as by poetic meter. This balance between idea and form is most wonderfully struck in "centaurs' blues:"

where does the rider start? where does the steed end?
who can know if he is steed or rider in the end?
something paused—and something galloped, gathering speed.

The poem, a take on traditional sonnet forms, continues with two more rhyming tercets and finishes with a couplet. Because The Art of Topiary has Wagner's German originals on the facing page, one of the joys of reading these translations is the ability to see where Keplinger was able to retain both sound and sense and when he compromised the former for the latter.

An American reader of Wagner need not know that the poet has translated Charles Simic and James Tate into German, but after reading The Art of Topiary Wagner's inclination toward these playful poets of dark sense and David Lynch imagism seems obvious. Like Simic and Tate, Wagner is capable of presenting reality with an accuracy that makes normality uncanny. The chameleon is "hiding in the world," and the dinner napkin has "nothing but the red butterfly / of lipstick inside." It is this mix of obviousness—a chameleon does hide in the world—and original vision—have you ever thought of those lipstick marks as a butterfly?—that give readers of The Art of Topiary the sense of discovery we all want, from life in general and from poetry specifically. When you add Wagner's musicality to his familiarly strange images the poet's place as one of the most celebrated contemporary German poets is eminently understandable.

In the book's title poem, Wagner describes the work of a topiary artist who has disappeared leaving "a gentleman's image as his last great work." Here is the literal image, the shape of a man cut by the man it mimics. Figuratively, the line encourages readers, at least this one, to think about how the images we make, through our seeing and description, in turn make us. Let's hope more of this gentleman's images appear in English, and soon.