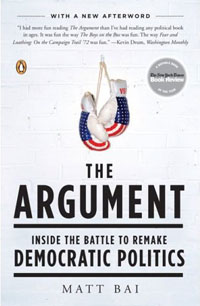 For nearly a century, Americans have wrangled over the proper role of government. In the 1930s, Roosevelt successfully argued that government should protect citizens from the excesses of unregulated capitalism. In the ’60s Lyndon Johnson expanded government’s role to promote racial equality and provide access to health care for the elderly and poor. Since the election of 1980, the prevailing argument has centered on Ronald Reagan’s vision of limited government and lower taxes.

With the Reagan Revolution now largely discredited by the failures of the Bush administration, what new argument about government will drive American politics? New York Times Magazine reporter Matt Bai thought he spied it among the billionaires and bloggers trying to build a new progressive movement. Bai’s new book, The Argument, chronicles his attempt to understand these new progressives and the ideas that motivate them.

Shortly after the defeat of John Kerry in 2004, a group of billionaires came together to form the Democracy Alliance. Led by the likes of George Soros and Hollywood producer Norman Lear, the new group hoped to finance the creation of the same type of advocacy groups and think tanks that Conservatives have funded for decades. But their efforts quickly descended into petty squabbles concerning the structure of the Alliance and its mission. Underlying this bickering is the fact that the billionaires had no common philosophy to provide a framework for their movement.

The bloggers seem even less interested in framing a cohesive argument, bringing an almost religious fervor to their daily war of words with George W. Bush and his fellow Republicans. Bai joins Markos Moulitsis Zúniga, founder of the blog Daily Kos, and Jerome Armstrong of MyDD.com on a book tour that calls to mind Bill and Ted’s Excellent Adventure. At each stop on their tour, Markos and Jerome are feted like royalty by the Democratic establishment, even though most of the old politicos don’t know quite what to make of the bloggers.

What becomes clear from reading The Argument is that these new progressives have no new argument to make to voters. Rather, they pledge allegiance to programs such as Social Security, Medicare, and Affirmative Action—programs that represent the high points of 20th-century liberalism. Their blind adherence to these old programs makes the consideration of any new ideas heresy.

By the end of The Argument, one is left wondering whether new ideas about government have any place in the age of the perpetual campaign. When the business of governing takes a back seat to currying favor with voters or raising funds, new ideas run the risk of upsetting fragile coalitions, scaring voters, and leaving a candidate open to attack. Until the American people refocus on the hard choices and often-boring details of governing, reporters like Bai will exhaust themselves in a futile search for new arguments about how we govern ourselves.