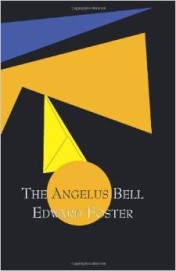 I knew a witty physician who found theology in the biliary duct, and used to affirm that if there was disease in the liver, the man became a Calvinist, and if that organ was sound, he became a Unitarian.
—Ralph Waldo Emerson

I do not pretend to know the state of Ed Foster's liver, but I do know his heart belongs to poetry. It may sound ludicrously redundant to say there is poetry in his poetry, but considering the prevalence of conversational and confessional free verse that has passed for poetry since at least the ‘50s, it is nothing less than revelatory to champion that remark.

What distinguishes poetry from prose is sound: assonance, rhyme, alliteration, vocalic and consonantal echo. It is significant that Foster has chosen for the title of his book not merely an implement for producing sound (a bell) but a religious one at that. This device alerts our attention immediately, before we've even taken the book from the shelf, that there are religious overtones to the work contained in this volume, a sense that there is a numinous value inhering in the musicality of language.

The Angelus is a short practice of devotion repeated three times each day, morning, noon, and evening, traditionally at the sound of a bell. It consists essentially in the triple repetition of the Hail Mary and commemorates the Incarnation of the Word of God within Mary's sacred womb, thus fulfilling the Old Testament figure of the Ark of the Covenant. The Ark carried the word of God in stone; Mary carried the word of God made flesh. This then is the central trope of Foster's collection, although Foster's spiritual underpinnings are far more Transcendentalist than Catholic.

Transcendentalist writers such as Henry Thoreau and Ralph Waldo Emerson and especially the late William Bronk are of tremendous consequence to Foster's thought and style. The Transcendentalist emphasis on solitude and private communion to know God and reality, its urge to reintegrate spirit and matter (again, the central trope of the word of God made flesh), and its advocacy of intuition over reason as a way to know the Real underlie Foster's thinking and gel in certain stylistic features. Foster, like Bronk, tends toward gnomic, epigrammatic lines that tease the reader into a more intimate communion with the processes of sound and inner revelation—a grammar of the soul, if you will, whose tenses and moods occur as testimony to "the ecstasies of solitude" and "angels tipping heads / from side to side."

Edgar Allan Poe instructed a young author to write the Tone Transcendental by using small words but turning them upside down. In our more postmodern literary vernacular, we would say by "defamiliarizing them," but I like Poe's image far better: I see them as bells. Words turned right side up so that we can jingle them. Foster achieves great affect by packing his lines with dense iambs ("Stephen is the saint who has us say the things," "clothes are uniforms without their cause," "setting sound by sound/ with shifting feet"), creating rhythmic expectations, then—abruptly–disrupting them, bringing intense focus on a word, or cluster of words. In the first two stanzas of "Beggers After Sound," for instance, note the way Foster puts a tremendous weight on the last line of the second stanza, contrasting the more melodic rhythms ("like beauty on a winter street") with the leaden spondees of "to hold them down," giving the last line's significance a visceral force and density:

Know first that objects and their laws
have weight, at least to me and you.
They also know that mind,
like beauty on a winter street,
is what we're taught to see.

Laws always weigh
the mind, and partial
to an angel's hand,
there's no real secret in
the objects and the laws.
They are your mind,
and hands are only things
to hold them down.

Like Bronk, Foster favors abstraction and dense, syntactical constructions over richness of imagery. But where Bronk remains stark and stunning as the winter light he preferred, in Foster there is a disciplined severity that contrasts more piquantly with occasional flourishes of playful lyricism, as in the eighth stanza of the wonderful poem "The Dark in Caravaggio's Light":

Here we find resonating in the musical terms "arpeggio" and "cantabile" Poe's Tone Transcendental: words like clappers in an angelus of sonic dispersal.