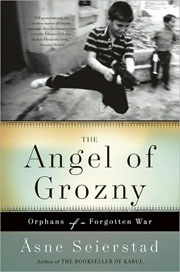 Åsne Seierstad has risked her life several times to write about the devastation of war within countries such as China, Kosovo, Afghanistan, and Iraq. Her international best seller The Bookseller of Kabul sparked a lawsuit against her, with the eponymous bookseller claiming that the book attacked and defamed his character. She has also been criticized for writing about countries riveted with deep historic conflict, about cultures and issues worlds away from her own. And yet, this criticism begs the question: How else will the world hear these painful stories? The Angel of Grozny, Seierstad’s latest audacious journalistic venture, comes at an appropriate time, as the world’s eye turns to Russia’s conflict with Georgia.

Surrounding all of Seierstad’s interactions with the people of Chechnya is the danger of choice: whether to remain silent or to tell your story; to smile and support the government, or to defy. She chronicles the amazing and disturbing capability of a country to change and to forget. Once a nation proud of its thirst for freedom, willing to fight Russia “till the end,” Chechnya now houses a puppet government, loyal to Russia and brutally intolerant of any opposition. Rebels who once fought in the wars against Russia now find themselves serving as bodyguards of an arrogant and corrupt president. As Seierstad writes, the conflict has become “chechenised”—it is now “Chechen against Chechen.” Those who resist the government disappear, and “those who associate with these people are enemies themselves. Those who weep at their funerals are dissidents too.”

Seierstad shares many stories of horror and cruelty, and the book reverberates with the plain fact that she has become deeply dedicated to exposing the true stories of the war-torn region. She develops several personal and emotional relationships with certain Chechens, and yet she manages to provide clear-headed accounts of the effects of the wars on both Chechen and Russian families. Both sides have lost thousands of people, and while violence still reigns in Chechnya, many incidents of ethnic violence also pollute Russia. The profound Russian-Chechen hatred seems to have no end in sight, and Seierstad herself struggles with feelings of futility, realizing “nothing will change. Everything will remain the same,” even as she tries to convince a Russian family to see the war from the Chechen side.

One Chechen woman, the inspiration for the book’s title, offers a window into the lives of those who have dedicated their lives to helping the war victims. Hadijat, the “Angel of Grozny,” runs a makeshift orphanage for children whose parents died during the wars. Many of the children suffered horrible abuse at the hands of their relatives or became bony husks while living and starving on the streets. Hadijat, among others in the book, sheds some hope on the bleak picture in Chechnya, the hope that people may one day be able to speak openly and expose the countless human rights violations occurring in the region.

As with all journalistic work on regions riddled with war and ethnic conflict, there is always the ambiguity of truth. “Everything in Chechnya had two explanations, one Russian and one Chechen,” Seierstad writes. All that the world can ask is that both sides get the chance to speak.